People usually visit paradise islands to relax. They call them paradise islands because they appreciate their peacefulness, serenity, virgin looks. Yet unruined by a civilization of men, the white sand beaches under the bright tropical sun seem unearthly. Is that how we imagine the perfect afterlife? I made a journey to Phu Quoc, one of Vietnam’s paradise islands, to organize a memorial service for my pet, a Vietnamese walking stick that passed away in Zagreb, Croatia, an 11.500 kilometers far European capital. 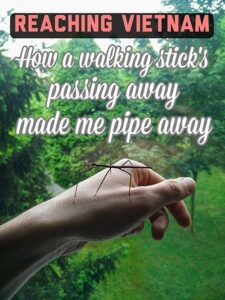 In May 2016, my friend Željko brought me a jar as a present. Inside there were two tiny, fragile animals, the Vietnamese walking sticks, or Medauroidea extradentat, as scientists prefer to call them. I’ve put them in a terrarium, and every night I’d use the water sprinkler to mimic the tropical rain.

Vietnamese walking stick is generally female. It reproduces asexually, through parthenogenesis. When the two completely matured, they started laying eggs. The new ones hatched would be the exact copies of their mothers. Soon my terrarium population was growing fast with the daughters of 1of2 and 2of2. As you can notice, I’ve named the inhabitants of my Unimatrix 01 system in Borg-classification language. “We are One” philosophy seemed to be the perfect designation of this enclosed biosystem where genetically copied animals pretended to be trees.

One day in December 1of2 stopped moving. She just went into the corner and peacefully stopped breathing

My daily morning habit would be to count them. By counting them, I could register new generations of their progeny. After 60-ish walking sticks, the counting became a rather challenging and time-consuming task. Being everywhere, on the glass walls of the terrarium, on the leaves, under the leaves, on the ground, on each other… I would always miss some. At 60-something I stopped counting them.

To be fair, these little nocturnal creatures do not move much during the day. Naturally, it took me some time to realize that one day in December 1of2 stopped moving. She just went into the corner, as if hiding away from her daughters’ sight, and peacefully stopped breathing.

Is she just playing dead?

I left her there for some time, as with stick insect one never knows. Once, one of them lost a leg (sometimes it happens, as they are fragile and could get entangled when shedding their skin in the molting phase), and that leg continued to move by itself for several days, while it was obviously dead! So I asked myself, how could I know that 1of2, the member of the species that is often playing dead, is indeed – dead?

After a couple of days of her not moving at all, it was evident she was not pretending. What does one do with such a deceased pet? Should I organize a burial? Should I just flush her down the toilet? Should I throw her to my carnivorous plant and hope it does the job? I decided to do something more appropriate: bring her to the homeland of her ancestors for her final rest!

Google searching for the paradise

Of course, it couldn’t be just any place in Vietnam. If I go through all the hassle, it better be worth it! This girl should go paradise! “Paradise islands in Vietnam” Google search showed a few results, with Phu Quoc, tear-shaped island, always claiming the top of the list. With its supposedly peaceful atmosphere, fresh air, crystal-clear sea waters, white sand beaches and green coconut trees, it did sound like an excellent choice.

Bringing a dead animal over several border controls; is that allowed?

And there I was, researching Vietnam visa requirements, buying flight tickets, thinking about potential legal issues of my idea… Bringing a deceased animal over several border controls; is that allowed? All those documentaries about people getting arrested for smuggling a bag of peanuts rushed through my mind. And on top of that, I am flying to the country which still applies capital punishment as a legal penalty! Then again… This is not a typical dead animal. Walking stick bug does not stink even when alive. At the moment this was just an empty shell, a vehicle that one of them used in its short lifetime, chitin exoskeleton at the most. I am sure we are bringing a lot of insects over the borders every day, except that their size makes them unnoticeable.

I carefully removed the dead body of 1of2 out of terrarium. Her sister 2of2, her many daughters and nieces, they all were standing still in silence. Vietnamese walking sticks do not cry.

I wrapped the fragile body in a paper tissue, enclosed it in the plastic bag, and hid it in my toiletry case, hoping that the mess in it would help for not detecting 1of2 on airports’ x-ray scans.

Before leaving Croatia, I just needed to do one more thing; sort out the insect-sitting while I am away. Lida and Sašo, the proud owners of Ramona and successful dogsitters of other dogs, live in my neighborhood and luckily accepted to take care of the Vietnamese gang too. I packed the whole terrarium and brought it by foot to their flat, 900 meters away. My mind, concentrated on the funeral of 1of2, completely forgot that Zagreb in early February is not a tropical paradise. At minus 10 degrees Celsius, I almost killed the entire offspring of the pet I wanted to provide a decent funeral for! How irresponsible, stupid and ironic that would have been! Luckily, these twigs with six legs are sturdy little fellows, and the warm apartment of Lida and Sašo made them resurrect from the dead.

In the end, I was carrying only one Vietnamese walking stick over the borders. When the machine issuing baggage tags asked me questions, I lied that I do not have any fragile or perishable items in my bag and proceeded to check-in. Four flights away (Zagreb to Istanbul, Istanbul to Kuala Lumpur, Kuala Lumpur to Ho Chi Minh City, Ho Chi Minh City to Phu Quoc), and 1of2 and me successfully and without troubles landed to our destination.

Floating away into the sunset of Phu Quoc

I have chosen Ong Lang Beach, one of the nicest and strangely less popular among the tourists on the island (which made our separation a private matter), and waited for the sunset. I wore my black swimming trunks for the occasion. After folding my boarding pass into a shape of a boat, I’ve put 1of2’s remains in this paper ark, and let her float away in the peaceful seas of the Gulf of Thailand. The waves slowly brought her away from Vietnam shores. 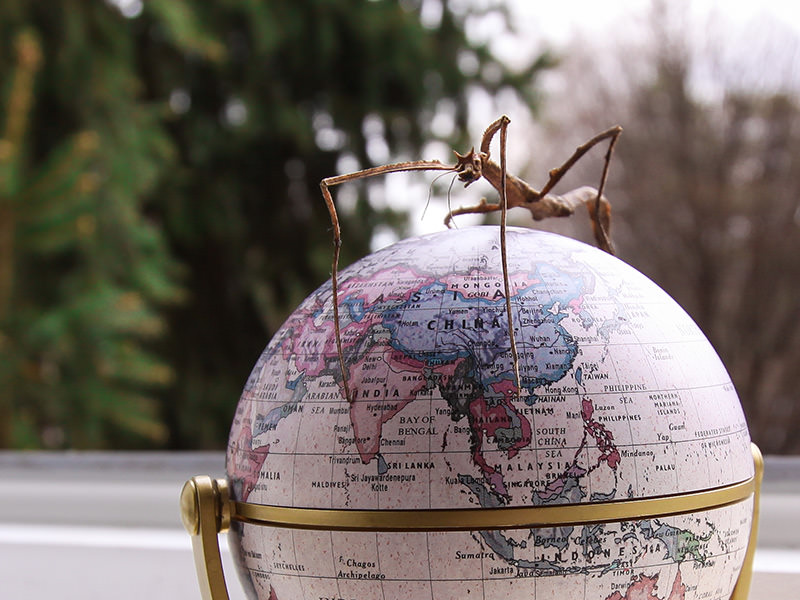 For the video of our farewell, as well as other videos mapping the extraordinary people, places and passions, visit and follow Pipeaway’s Youtube channel.

Still searching for a paradise place to stay?
Check these hot deals at Phu Quoc Island!

The Laban Hotel Review: Where the Compass Beats the Clock

Naked Men Hiking: When I Am Nude, All Fears Disappear

Chill & Cheap Getaways: Relax in Southeast Asia on a Shoestring!

Hot pot at Seahorse Resort : Flower of tastes and colors

The Laban Hotel Review: Where the Compass Beats the Clock