The year of 2017 will stay in my memory as a year when I decided not to travel for leisure or business. It was the year when I decided I could do both – at the same time! My big adventure of 2017 was built on the idea that I could just dare to – go. To leave my Croatian home for a longer period, and try to work AND enjoy on the road. The trip of 2017 brought me to three continents and fourteen countries, five of which I have visited for the first time! This is my 2017 year in review, with my best read articles and most liked photographs!

At the moment, I am in my hometown of Zagreb, proclaimed as the best European Advent destination for the third year in a row. But I am not here for the Christmas market, nor for the patriotism. I returned to Croatian capital to finish the editing of one of the travelogues I’ve been engaged to make for Croatian Radio. It is one of the side jobs I accepted to do, to support my big adventure. The radio documentary will air in April (I will certainly inform you about this in time), but the edits had to be done these days, so I am spending my winter days browsing through the sounds of Asia, the continent that occupied the first half of Pipeaway’s 2017 big adventure.

Planes, trains, buses, cars and ferries brought me this year to Malaysia, Vietnam, Japan, Cambodia, Indonesia, Singapore, Canada, Belgium, Hungary, Germany, France, Sweden, Romania, and of course – Croatia. This means that my current score (if we should ever express this kind of experience in mathematics) is five continents and 35 countries!­­­ Exploring the unknown regions of the world, as well as the familiar Croatian places such as Istria, Split or Dubrovnik, was enrichening in many ways. I am looking forward to extending my personal world map of extraordinary places in 2018 even further!

It is true that this blog is trying to map not only extraordinary places, but also remarkable people and passions. Moving to so many destinations in one year has been a bit overwhelming, I admit, and that means that people and passions categories of my website were slightly out of focus. This did not stop you from bringing an interview with one denuded traveler and several unusual festivals of Europe and Asia to the top of the best read pages!

Here is the top list of the articles you have visited the most in 2017! I challenge you to read those that may have missed your attention earlier! 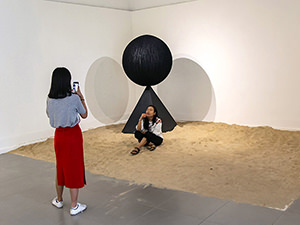 Two girls visited Galeri Nasional Indonesia and decided to interact with the exhibition physically, for the sake of taking selfies! The article went viral in Indonesia, and attracted more than 35.000 pageviews and 3,7k shares on Facebook! 2. Naked hiking: When I am Nude, All My Fears Disappear

The interview with Erik, the Australian naked hiker, was one of the first articles published at the official launching of Pipeaway website, on March 28th, 2017. It also stayed one of the most intriguing materials to read until today!

3. Selecting a Plane Seat: 5 Reasons Why Last Row Should be First Choice

The flight seat should never be assigned to you by pure chance! This article, in which I explain why do I prefer the last row over any other (OK, I might reconsider it if they would offer me the business class seat as an alternative), has attracted thousands of your eyes.

4. Kanamara Matsuri Penis Love: Leave Your Inhibitions, Suck it In!

Japan is full of fantastic traditional festivals, and Kanamara Matsuri in Kawasaki is undoubtedly one of those! This Shinto feast includes the street procession with giant phalluses and different penis-shaped delicacies for your mouth to enjoy!

The article which debunked the myth perpetuated even by the giants such as Lonely Planet, discovered that the abandoned amusement park in Nara, Japan, has been totally demolished. The exclusive images from my urbex inbreak into the site showed that even ghosts abandoned the legendary ruin. In May I also took you to some unique hostels the bustling Japanese capital is offering! Blending art and accommodation provides some great solutions for the dilemma on where to stay in Tokyo.

Cambodia may provide a cultural shock to the Western traveler, but this 5-stars hotel offers both comfort and responsibility, luxury and sustainability! Very soon Jaya House in Siem Reap might become the world leader in the hotel industry. Remember where you first read about it! Folsom Europe Street Fair is one of the largest gay fetish events on the old continent. Many of you wanted to check why this kinky event attracts more than 20 thousand tourists to Berlin every September!

My Malaysian visit started off with attending the Hindu’s Thaipusam Festival. Its extreme body rituals are still embedded in my memory, and make me want to return to Batu Caves, or other temples celebrating Lord Murugan!

Wrapping this top 10 list of the most read articles in 2017 is the follow-up to the overall winner. The Selfie Girl speaks up in this one, while I uncover the aftermath of the virality that the original article experienced in the social networks in Indonesia.

While direct arrival brought 38,9 % of the visitors and the organic search 18,1 %, Pipeaway’s top channel in 2017 has been the social one – 41,8 % of you have been arriving at these pages from some social link! What does it concretely mean in numbers? Pipeaway’s Facebook page has 12.588 fans. Our Instagram account grew organically from zero to almost two thousands in nine months. There is 551 follower of Pipeaway’s Pinterest account, while Twitter account, for now, has only 276 of them. I have also launched Pipeaway’s Youtube channel, but mainly for embedding videos on the website. While I would love to grow the following there as well, it sadly cannot be in my focus at the moment.

On the other hand, Instagram account @pipeaway.project is the tool I use every day, for publishing new photographs and accompanying short stories. Those might be attached to the articles I post on the blog, but can also be on something I will not post, or not post soon. So it is a great way to stay in touch with my piping away process!

A few of my pics were shared on other Instagram accounts as well, but none of them had such success as my photograph of an unusually colorful sunset in the beautiful Croatian town of Dubrovnik! The image gained the most attraction on the official profile of Croatian National Tourist Board – more than 20 thousands likes! It made it the second most liked picture in 2017, which brought me a prize. I still have to find out what it is!

The dog ate my shoe

This was not the only prize I unexpectedly won this year! In Kampot, in Cambodia, a dog has eaten one of my Startas shoes – even the camouflage design did not help it to hide from its jaws! When I returned to Croatia, I found out that Startas saw my little story shared on Facebook and sent a birthday present! Three brand new pairs of their signature shoes were waiting for me!

Water splashing from Cambodia to Serbia

There was another image of mine that attracted some significant attention in the past year! Ladies on the scooter being splashed with water during the Khmer New Year celebration in Battambang, Cambodia, ended up competing in the PICKS Balkan Edition 4 / Travel Photo of the Year 2017 Contest. The art photography festival Fotorama had to choose between 2.000 images, and my photograph entered the top 30 to be exhibited in the National Museum of Kragujevac, Serbia!

Besides attracting the attention of Dubrovnik lovers on other Instagram accounts (this was the first time anyone asked me to buy my photo print!), the sunset in King’s Landing ended up on the top of my own account’s most liked and commented images as well! The sunrise on the other side of the world, at Ijen Volcano, in Java, Indonesia, ended up in the second place. So who can say that golden hour isn’t truly the best time to shoot?

The other of my top 10 images I posted on Instagram in 2017 include photos from Penang Island in Malaysia, three amazing hotels (Jaya House RiverPark and Rambutan Resort  in Siem Reap and Hyatt Regency Yogyakarta on Java island), two images from Bali (Ubud Palace and Munduk waterfall) and another view of Dubrovnik’s amazing fort walls!

By making seemingly ordinary steps, we can build an extraordinary road

There are so many people and organizations I could thank for helping me make all of this and much more to come – possible! The list would be very long, and I know they did not do it for the laurels! What makes me truly happy is the fact that, in this short period, I have managed to meet the minds that think or at least dream alike. And that by doing seemingly ordinary daily steps we can build an extraordinary road.

Before 2017 big adventure, my travels to thirty world countries mainly included business trips (be it for my jobs of the cultural producer or journalist) OR rare holidays (when I would be removing myself away from the stress of the home-based work). When I decided that the matter of stress could be taken under my control, approaching the sustainability of the long-term traveling, that supports the work one enjoys, became an easier task. Believing in one’s own capacities provides the security that any path one decides to explore, even if it might be utterly unknown, will have to be rewarding. Or at least educational. And that is already a reward!

After I finish my radio documentary in January, I will probably fly shortly to Rome. I have never visited the Italian capital before, but this time my primary motivation is obtaining the visa for Ethiopia. I plan to fly there in February and explore it for several months. It will be my first trip to Africa, and I am really looking forward to it!

On my way back to Europe, I imagine exploring Greece, Turkey, Bulgaria and Romania, getting back to Croatia in August, when the Mediterranean is truly blooming. In September, I have an invitation to visit Norway, and afterward, I plan to fly towards Asia again, with South Korea first on my list. I plan to stay eight months in Asia in 2018/2019 season.

If you have ideas on where my Pipeaway trip should bring me (on this route, or some other one), I would really like to hear and consider them. Please post them in comments; I will certainly appreciate it! I am always open to suggestions and ideas for collaboration! 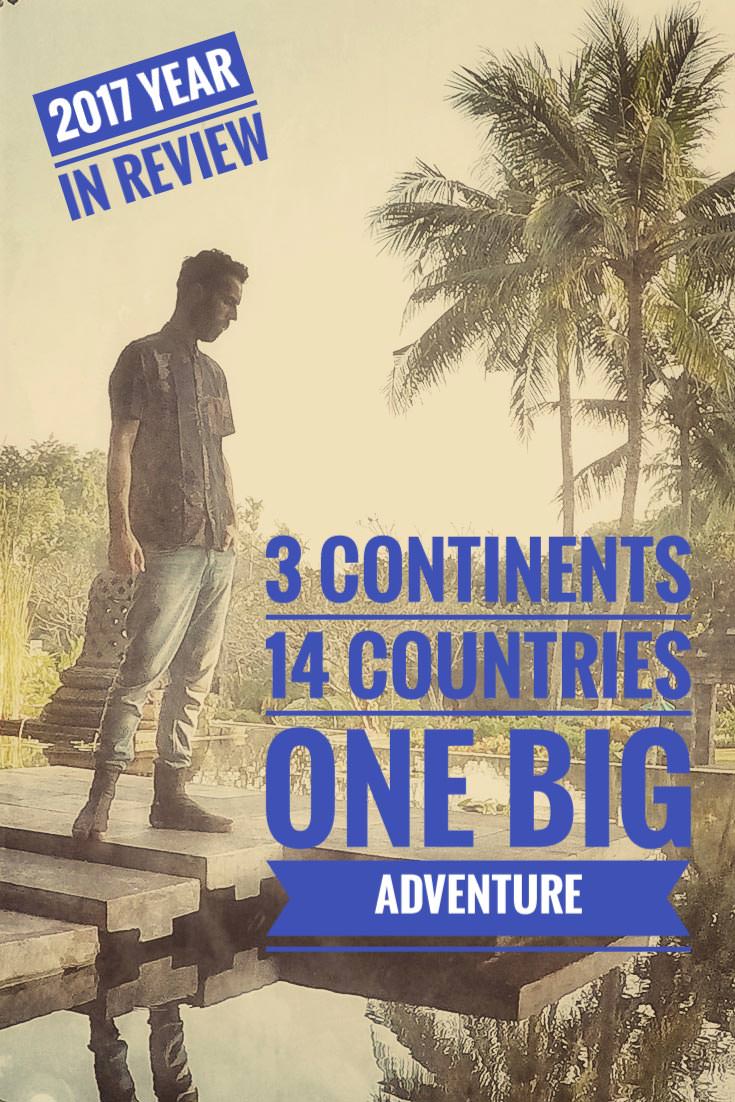 2022 Year in Review:
Ready for Restart

Solo Travel: What Is a Spectacular View, if It Takes Only Your Breath Away?

‘You Have the Best Life’ & Other Little Illusions