What are the best airplane seats? I have an easy question to this widely debated question: go for the last row! The last seat on the flight is always my first choice!

Selecting a plane seat may or may not be your worst nightmare. With so many pros and cons for any of them, deciding on the best place to sit on an airplane gets complicated.

Are the back seats on a plane good? Airport staff seemingly objects: “Are you sure you don’t want to be reseated to a better seat?”

Picking the last seats on flights could definitely raise an eyebrow or two. It might happen that even the airport staff at the baggage drop-off asks you: “Are you sure you don’t want to be reseated to a better seat?”

Is the last row of the plane really that bad? Sure, the ride in the back of the plane could be bumpier, the seats in the last row sometimes may not fully recline, they are also just in front of the plane’s toilets area, and they are never actually mentioned as the “best seat on a plane”.

But there are also many unmentioned benefits of sitting at the back of a plane, some of which I will discuss in this post on the best airplane seats.

My choice might not be everyone’s cup of tea. But until somebody rewards me with the business class treatment, I will always be choosing “the worst seats of the economy class”.

Here is one example to illustrate this idea! The flight from Riga, Latvia, to Frankfurt, Germany, was not a long one. Lufthansa brought me there for two and a half hours. But flights that depart at 06:30 in the morning make one sleepy, no matter how long the actual trip is.

Drugged by the narcotic sound of the plane engines, rows and rows of travelers fell into sleep, with their jaws dropping on their chests as if they were waiting for a dentist checkup.

Just at the moment when I planned to hit the sack myself, something scratched my heels. Did the life vest fall off? Has the part of the seat crumbled? Did somebody’s bag get legs?

It couldn’t be! Both mine and the row behind mine were the emergency exit rows. I know that for many people these are indeed the best plane seats. They provide more space, but no luggage could be stored beneath those plane seats.

Hence, the tickle I sensed did not derive from a bag.

I moved my legs apart and in between, the two shiny shoes emerged. Whose legs were these?! How could someone sit in the extra legroom plane seat, and still not have enough?

Not only was his extra legroom not enough, not only was the space below my seat insufficient… His legs were actually invading the legroom of the seat in front of him!

Was he the tallest man on Earth? The sleeping passenger wasn’t exceptionally tall. The fact was that somehow he just spilled out of his seat as if he was a liquid, and diffused all over the floor.

Making your own “extra legroom”

Unpedicured in-your-face toenails could make one puke even on the firm ground. People go to schools to handle this for a reason! It should not be something any civilian can handle!

But how to approach the issue when you are in a confined space with no possibility to run away?

In my case, luckily the flight was short, and the leg appeared just before the landing, so I decided not to confront the female passenger behind me.

But how would you handle this on a long flight? If the alternative to not seeing this unpleasant sight is getting into a conflict, and maybe even winning it, is that truly a win? Or would you spend the rest of your flight replaying the quarrel in your head?

Benefits of sitting at the back of a plane

These two events did not only reconfirm that the last seats on flights are the best airplane seats.

They also reminded me how important is online check-in. Never ever leave the choice of your seat row to the fortune of the airport check-in!

And here is why the supposedly least attractive seats at the back of the plane should be on the top of your list!

1. When seated in the last seat row, there is no one sitting behind you!

Don’t you just hate it when somebody’s knees are poking your ribs through the seatback throughout the entire flight? This can be annoying even when in a cinema and someone is constantly pushing their feet against your seatback.

Plane seats are not known for the greatest sturdiness, so if the annoying passenger behind you can be avoided, why would you think twice about sitting in the rear of a plane?

2. The chance is nobody else wants to sit in the last row of seats!

Being well-marketed as the least attractive on the plane, last-row seats often stay empty.

On the smaller planes, certain portions even get reserved for the cabin crew, who don’t necessarily use them.

So if you hit it big, it could just mean that instead of sleeping on a reclining seat, you could actually spread yourself over two or three empty seats that do not recline!

Sitting in the back of the plane may bring the luxury of a proper rest!

3. Small children are sitting far away from you!

Family designated spaces in the plane are often at the bulkhead seats which face the partitions that divide different sections of the aircraft.

These have no seats in front of them, so if you opted for bulkhead seats, you indeed could have gotten more legroom.

But also your first neighbors might be babies and toddlers sitting on their parents’ laps. Bulkhead seats sometimes have extra oxygen bags for children, so this is the place where the airline will put the crying babies.

Enjoy your extra legroom! I can’t hear anything from the last row!

4. No blocking in between the drinks carts!

Yes, sitting just in front of the toilet may be annoying if people start piling up in front of it as if the bathroom might run away.

However, it is even more annoying to have to go to pee, while being blocked in between the carts from which the flight attendants serve the drinks to the passengers. That sound of the coffee hitting the cup, makes you want to pee even more! And the toilet is so far!

Sitting in the last row means you will always be the first in the queue for the loo. Wait, did I say queue? What is a queue?

5. The plane seat in the last row is the safest one!

The last, but not the least important answer to the question “What is the safest seat on a plane?”!

From when I’ve heard the conversation of a pilot talking to his civilian friends about how he always chooses the last seat row when he flies in a private arrangement, because “the last rows come with the safest seats on a plane”, I follow this advice whenever I can.

Sure, airlines will tell you this is not true, as then everybody would just want to sit in the back of an airplane.

But statistics do confirm that after a flight crash, the construction of the aircraft’s tail will be the least damaged. Therefore it is not that unusual that even the flight recorder, commonly known as a black box, is placed in the plane’s tail section, where it is more likely to survive a severe crash.

JAT flight attendant Vesna Vuković survived the plane crashing from the 10.000 meters height not because she jumped out of it with a parachute, but because she was sitting firmly next to the supposedly repulsive toilet section.

Of course, there are various arguments one should take into account when choosing a plane seat. Consider some of them mentioned in this video!

To find the best airplane seats, we have to take into account various priorities passengers might have.

Sometimes, it is hard to reconcile practicality, comfort, safety, and personal preferences when we are forced to enter a confined space and share it with strangers for a couple of hours or more.

If you would take 100 passengers, you would get 100 different airline seat reviews. So searching for the best airplane seats always involves making certain compromises.

You might have a backlash to the controversial idea of picking the last seat as a first choice. But you will not be able to make an informed decision without ever experiencing it.

Choose the last row of seats next time you fly! After all, sitting in the back of a plane won’t kill you if you try! Pun intended.

Did I convince you to consider sitting at the back of the plane?
Pin this article for later! 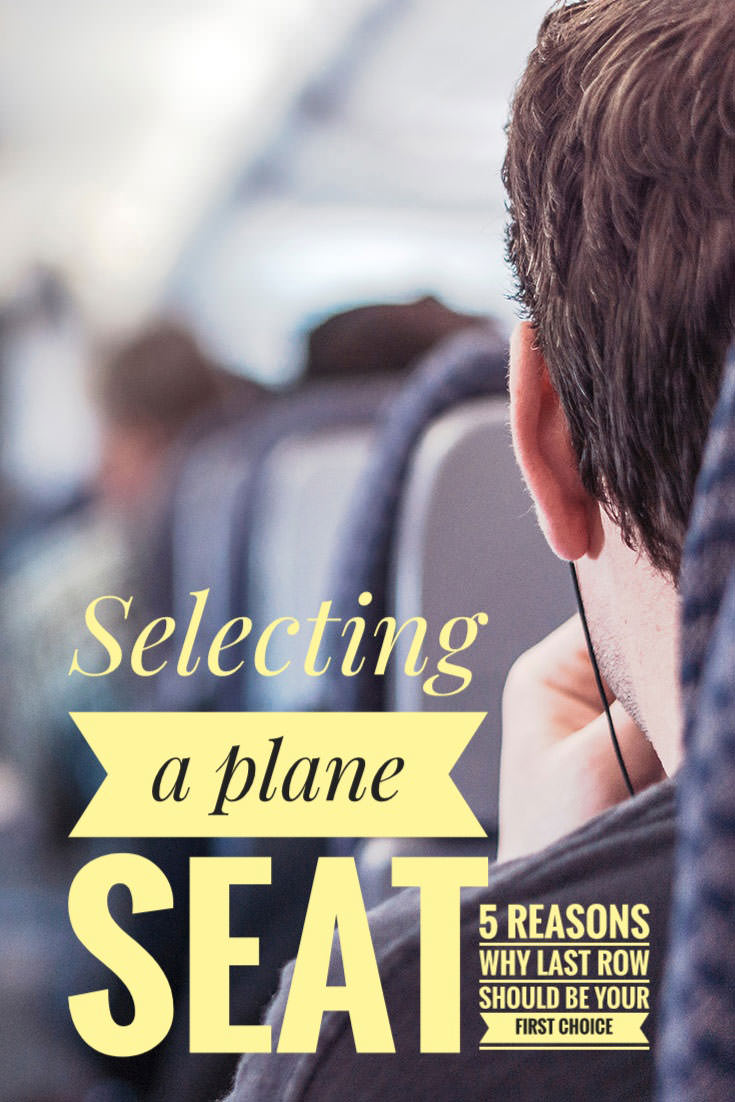 Spring in Japan: Did Anyone Mention Cherry Blossoms?

Flying While Fat: Obese Passengers on a Plane

Bulkhead Seats on a Plane – Pros and Cons

Is It Worth Paying for Extra Legroom Seats?

A Matter of Life and Stuff: Things We Do For Things

Pipeaway in The Mirror: Why the ‘Worst’ Seats are Actually the Best?