NuArt Sculpture Park in Bandung, on the Indonesian island of Java, is an extraordinary place to visit! A giant whale penetrates the path just before you expect the asphalt wave splashing against you. Artificial trees grow next to the natural ones. A copper cow enjoys the afternoon on the fresh grass. Fish flying through the air are frozen in the moment, while you hear a waterfall in the distance. For the creative observer, this is an enchanted forest where art and nature produce magic! At the end of the official visitors’ pathway, I decide to climb the hill a bit more. And then, behind the rusty fence and lush tropical vegetation, the moment becomes truly magical. I discover – Him. The great Vishnu. Surrounded by scaffolding and partly covered by fabric, he quietly poses in front of my camera. When the artist Nyoman Nuarta transports him to GWK Bali Cultural Park (Garuda Wisnu Kencana) and assembles all the pieces, it will become one of the largest statues in the world!

The mind behind the idea of building the biggest statue of Lord Vishnu ever was Joop Ave, Indonesian minister of tourism in the 1990s. He was dreaming of a monument that would symbolize humankind’s journey into the new millennium, but also become the iconic landmark of Indonesia. The new millennium has arrived and Mr. Ave has passed away. But his vision, after two decades of construction, financial crisis, and political changes, finally hits the finish line. The gigantic Vishnu statue should be dominating the Bali landscape in autumn 2018 or spring 2019, depending on if you ask optimists or realists.

The famous Indonesian sculptor Nyoman Nuarta is working hard in his Bandung workshop to meet the deadline. Hundreds of associates are involved in constructing the statue in copper and brass, cutting it in pieces, transporting those to GWK Bali, and reassembling them again.

Designed as a visual spectacle, Garuda Wisnu will present Lord Vishnu, the source of wisdom and the preserver in the Hindu trinity, riding on the back of his faithful mount Garuda, the divine eagle-like creature. The statue will stand more than 121 meters high, with its wings span of 64 meters! It will weigh more than 3.000 tonnes!

When we think of massive religious monuments, many will first recall the iconic Rio de Janeiro statue – Christ the Redeemer. Brazil is almost 90 percent Christian, which makes it perfectly logical to celebrate the Christian god. But in Southeast Asia, the laws of logic don’t work the same. The Vietnamese, one of the world’s least religious nations, have built Christ the King in Vung Tau, even bigger than his Rio counterpart! In the country where Catholics make 6,2 percent!

In Indonesia, the majority of citizens are Muslim, but we know that the depiction of Muhammad is a controversial issue. The tallest sculptures in Indonesia at the moment are those of the Virgin Mary in Semarang, Central Java (with its 42 meters, it is the world’s tallest Virgin Mary statue), Jesus in Makale, South Sulawesi (40 meters), and another Jesus in Manado, North Sulawesi (30 meters).

The tallest statues in the world are those of Buddha. When Indonesians, with barely 1,7 % of Hindus living in the country, finish Garuda Wisnu, the world’s top three will be richer for the first Hinduistic deity!

Dominating the GWK Cultural Park, Garuda Wishnu will be nearly 40 stories high, visible not only from Ngurah Rai International Airport but also from places such as Tanah Lot, the ancient Hindu temple on the rock, 30 kilometers away!

In the original vision, the enormous sculpture was supposed to be 146 meters tall! Balinese religious authorities complained that the statue’s immense size would disturb the spiritual balance of the island of gods. So the compromise was made to reduce it for 20 meters.

Even if GWK Bali stimulates the commercial development of the southern tip of Bali island as well, the team behind it claims that their intentions were always mainly cultural. Borobudur was built in the 9th century, and they thought that Indonesia needed a new masterpiece.

Nyoman Nuarta – the master for the job

Nyoman Nuarta is one of Indonesia’s finest modern sculptors. His works displayed in the homonymous gallery in the northern part of Bandung, in West Java, astonish with craftsmanship. NuArt Sculpture Park opened to the public in 2000, and while it primarily exhibits Nuarta’s work, it also welcomes guest artists, especially the young ones.

The gallery’s Craft Boutique offers a series of Nuarta’s miniature artworks. But, walking through the 1.000 square meters of indoor space, and roaming through the three hectares of the park itself, it becomes clear that this man thinks big!

He placed one of his largest sculptures on the building in Surabaya’s naval base. The 30-meters high Jalesveva Jayamahe represents the navy officer greeting the ships passing by. It shares third place with Jesus on the top list of the tallest Indonesian statues.

Two decades later and with a hundred million dollars spent, pieces of Garuda Wishnu are slowly being transported from Bandung to Badung, from Java to Bali. The trucks have to bring the parts 1.000 kilometers east so that they can install them at GWK Cultural Park.

Leaving the mark in Indonesia’s history is not an easy accomplishment. The process took longer, but the peaceful Vishnu’s face resting in Nuarta’s workshop, with his eyes half-closed, almost reassures. Gods can wait.


Did you like this article?
Pin it for later! 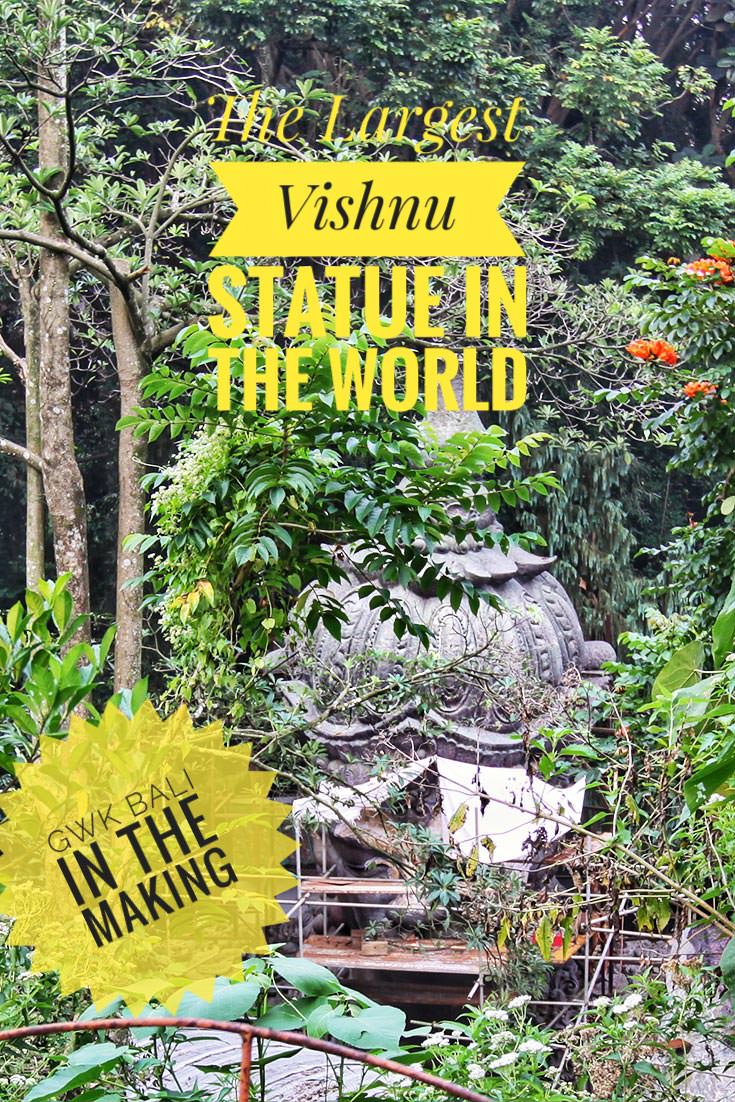 Croatian TV: Pipeaway Exploring Excellent Places You Have to Visit

Hotel Belvedere Dubrovnik: Abandoned Arena of the Game of Thrones