The Chicken Church in Indonesia is a surreal piece of architecture. Not far from Borobudur, the largest Buddhist temple in the world, an unexpected religious monument arises from the dense jungle.

With an open beak, a gigantic bird nestled on the top of Bukit Rhema, an unassuming hill in Central Java. Not something you stumble upon every day, and certainly not while exploring remote villages of Southeast Asia!

The church shaped like a chicken had to resemble a dove. That’s how its builder Daniel Alamsjah saw it in his vision. But a different nestling hatched.

The peasants had their own name for the crowned bird. They called this temple of prayer – Gereja Ayam, the Chicken Church. The name stuck. Nobody saw a dove from Daniel’s vision anymore!

Some screen time helped the hen-shaped building reach international fame. Tourists started paying pilgrimage to the site, not necessarily with religious intentions. The Indonesian Chicken Church became the second-best reason to visit Magelang Regency. Just after Borobudur, and before other sunrise peaks in the area, such as Punthuk Setumbu.

“I’m a Christian”, Daniel Alamsjah told me, while standing in front of the silent proof of his faith, the enormous building shaped like a bird.

Exactly behind him, two sculptures of angels were blowing into trumpets. One could argue that all three of them might have had the same mission, to alarm the world the end times were approaching.

After the great Biblical flood, when an Ark with paired animals stranded on Mount Kardu, a dove brought Noah the olive leaf as a sign of safety. Could Daniel’s dove on the top of this Indonesian hill, 40 kilometers outside of Yogyakarta, be a similar signpost for those who look for salvation?

This contrite, seemingly doddered man standing before me, did not radiate the leadership of a chosen one. Yet, God spoke to him in the 1980s! And not many believed in this divine intervention.

Four decades after Lord’s instructions to build the prayer ark, and years of great debt floods, a House of Prayer for All Nations is still a work in progress.

Gereja Ayam, a church shaped by visions and voices

“One day, I was on this hill to pray to God. After a long prayer, I heard the voice that told me to build a church here”, this tenacious 77-year-old explained the Gereja Ayam origin.

Visions started back in Jakarta, where Daniel Alamsjah worked at the time. He ended up in the import-export-trading company only after a priest’s prayer miraculously healed his lung disease, and he managed to pass the medical exam for the position. His career was advancing. Daniel would often recognize the invisible hand of God leading him to the path that eventually resulted in the Chicken Church of Indonesia.

After one night’s prayer, an image of the hill with a House of God appeared on the walls of his Jakarta home. Daniel didn’t understand this message at first. But after he visited his wife’s family in Magelang, he stumbled upon a hill that looked the same as the one from his vision. Daniel connected the dots.

The hill was infested by snakes, but he decided to spend the night there in prayer. The words from the Bible appeared in front of him, explaining that he was chosen by the Lord to build this holy house. He should stay brave, as God’s plan would eventually come true.

Very soon, God’s hand brought the owners of the hill to him, interested to sell the land. Daniel took the money from his son’s college account and launched a project that even his own family would not always support.

The construction of the Chicken Church in Indonesia started in 1992 and quickly arrived at the first obstacle. In a predominantly Muslim country, the project of a Christian man building a ‘church’ on a hill that will later become known as Bukit Rhema, was under a magnifier.

But Daniel was persistent. Every weekend he would travel from Jakarta and back, to monitor the construction site 500 kilometers away from his home.

It took one media report in 1996 to launch an avalanche of complaints against the project.

Daniel tried his best to explain that his prayer house would be open for people of all religions; Christians, Muslims, Buddhists, and even atheists.

His building permit was not revoked. However, the construction came to a stop in 2000, because of a lack of funds.

When the financial problems occurred, the idea of a snow-white dove resting in Bukit Rhema was left over to the jungle. After Daniel decided to add the crown on the bird’s head, everyone saw it as a rooster’s crest. Gereja Ayam, the ‘Chicken Church’ name was hatched.

But the same way as the local newspapers practically led to the shutdown of the Gereja Ayam project, the international media coverage of the strange building infused new life into it.

The Daily Mail and Huffington Post published articles on this unusual piece of architecture. Abandoned in the Javan jungle for 15 years, the Indonesian Chicken Church gained a new spotlight.

Bird building for the love birds

“Many Buddhists come and support”, Daniel told me. “They visit Borobudur, and then they come here to sleep and pray. And they give donations! Thanks to them, and to your tickets, I can invest further in the building!”

Couples were choosing to marry in the Chicken Church. All religions, Daniel confirmed. “Are you single?”, the passionate wedding planner asked me with a spark of hope in his eyes.

Truth be told, the love birds never really deserted the chicken temple, even in its official abandonment phase (2000-2015). For couples from the nearby villages, the church that looks like a chicken was supposedly a safe place to get physical, away from the eyes of their not always supporting families. Vulgar graffiti and images of naked ladies became standard wall decorations in those years.

Today it is different, Daniel Alamsjah convinced me while we posed for a photograph in front of the columns with a heart-shaped decoration at the top. The message was “Welcome to Bukit Rhema, We are one”.

Inside the Chicken Church, framed images of married couples, in a variety of traditional costumes, hung on the wall.

The fact that a scene from the second sequel of the cult Indonesian movie “Ada Apa Dengan Cinta” (AADC – “What’s the Deal with Love”) was shot here, certainly contributed to the popularity of the Chicken Church in Indonesia. Especially as a sunrise spot, because the actors climbed on the dove’s crown at dawn.

In the basement of the Chicken Church, I found a variety of prayer rooms, serving different religious needs. From Christ’s nativity scene in a niche in the wall to the room with carpets facing east, this cave-like labyrinth of Chicken Church underground chambers catered for visitors of different denominations. Just like Daniel Alamsjah imagined, the House of Prayer for All Nations!

But these were not just the communication rooms with the “other side”. As I’ve learned from this grey-haired visionary, the Chicken Church was used also as a therapy center. The catacombs were a place of rehabilitation for disabled children, problematic youth, drug addicts, and even people with psychiatric diagnoses. You know, those who had visions, and heard voices. Well, let’s not go there now…

The other floors also had murals celebrating the rehabilitating mission of Gereja Ayam. There were paintings of young people alienated by technology, seduced by cigarettes, conquered by alcohol, and abducted by narcotics. The messages were clear and simple: “Say no to drugs!”

Is this temple of prayer on Bukit Rhema – a church?

Even if it was nicknamed a Chicken Church, there were no regular church rituals performed in Bukit Rhema. Gereja Ayam was more of a venue catering to the specific spiritual needs of its visitors.

The ambiance of the main hall, with its wide-open space, and rosette-openings on the ceiling in the shape of a cross, did emanate a feeling of some neo-gothic cathedral. But tiles with a simple flower design, and heart-shaped stones thrown here and there, were just basic symbols, implemented by an architect without a diploma, and not some medieval master.

A table and chairs mounted with broken mirror glass, like a kind of disco balls, were more reminiscent of some Lady-Gaga-style video set-up than of church space. It was obvious, this was a very loose interpretation of how a prayer house should look, with no interior or exterior design dogmas followed.

A mouse jumping from the stairs leading up to the dove’s head, the viewpoint, seemed like something one could expect in an old church. But there was no bell tower, nor would we meet Quasimodo the hunchback by climbing to the top.

Only a dove head, adorned with a chicken crown, pointing towards Mount Merapi, Indonesia’s most active volcano. The pupils of the eyes of the Chicken Church had the shape of a cross. Obviously, there were numerous ways of witnessing one’s Christian faith. God works in mysterious ways.

Fowl of Liberty in the Indonesian jungle

Daniel Alamsjah did not chicken out when he received the messages he interpreted as the word of God. He invested his life savings in a dream that didn’t have a promising business plan.

Thirty builders engaged in a project directed by a man with no background in architecture, to erect the jungle church of enormous proportions.

When Daniel decided to add the Statue-of-Liberty spikes on the head of his dove, hoping that the crown would elevate the building’s holy status, he did not imagine that other people could interpret his vision differently.

But he embraced the branding of the Chicken Church, trusting that strange are the ways of the Lord. The growth of the visitor numbers enabled the sustainability of the building process. It also enlarged the tourism potential of the villages around Bukit Rhema, where nobody expected it.

Chicken Church – Indonesia’s monument to faith as a personal thing

Before the Chicken Church in Indonesia received media coverage as a blessing for its future, one amateur painter in Borja, Spain, engaged in a similar journey of incredible bravery. In 2012, Cecilia Giménez (82) attempted to restore Ecce Homo, the century-old fresco of Jesus. Her devastating restoration, in which nobody could recognize Christ anymore, resulted in worldwide mockery. But it also attracted hundreds of thousands of tourists to this rural area of Zaragoza, helping the local economy in a way that no marketing expert could replicate.

For all that it matters, Gereje Ayam could resemble a pelican!

You see, it is not really essential whether Daniel Alamsjah’s church looks like a chicken or a dove. We shouldn’t care even if this House of Prayer resembled a pelican! It is a grandiose realization of a crazy dream of an unstoppable man. Something most of us would never do in our lives! A monument to taking risks and expressing faith.

Locals could not understand the eccentric project of a visionary in the 1990s. But with the expected future tourism development in Magelang, it could happen that the Indonesian Chicken Church becomes the one laying – golden eggs.

Did you like this article on the Chicken Church in Indonesia?
Pin it for later! 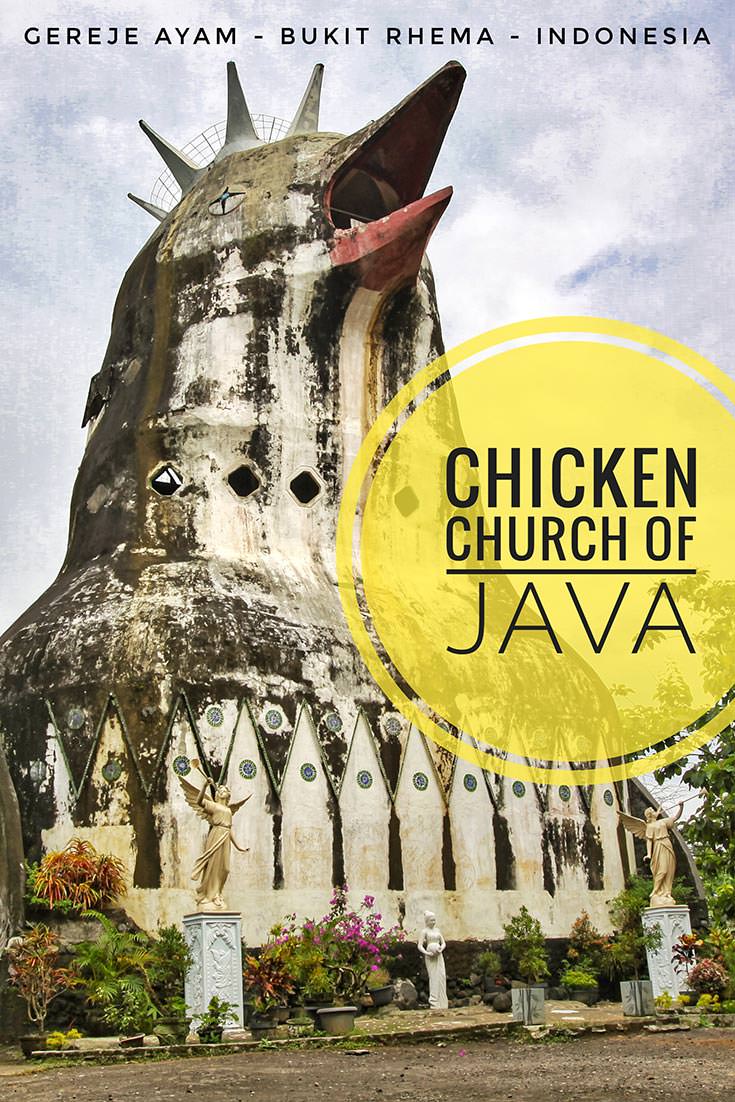 Am Phu Cave in the Marble Mountain: Stranded in the Hell Cave of Vietnam

Ossuaries of Solferino and San Martino: Churches Made of Soldiers’ Bones

Predjama Castle: Inside the Slovenian Cave of Thrones