Katapultura, Croatian Radio’s show on (not only) culture, started 2021 by offering its listeners a short escape to faraway world destinations. These are the places where New Year celebrations happen in a different way or even time.

The calendar is a product of a social agreement. Most scholars estimate that Jesus was born between the 6th and 4th year before Christ. That is already a paradox on a linguistic levelIvan Kralj

“Today, we celebrate the New Year on a day determined by Pope Gregory XIII, in the 16th century. According to that Gregorian calendar, we are entering the year 2021. And time is divided to an era before and after Jesus Christ. Most scholars estimate that Jesus was born between the 6th and 4th year before Christ. That is already a paradox on a linguistic level”, Ivan pointed out at the beginning of the show.

Indeed, it seems that counting time exposes the dominant power. Christian civilization definitely imposed its calendar on the rest of the world. “But other civilizations have their own versions of the calendar, Jewish, Islamic, Buddhist, Chinese… Each of them has a peculiar starting point for the counting of time. Even us, in Croatia, if we were to follow the Vučedol calendar (Orion, the oldest European calendar discovered in eastern Croatia, Ed.), we wouldn’t celebrate the New Year on the 31st of December, but on the spring equinox, at the twilight of the first day of the spring”, Pipeaway editor explained.

The calendar is indeed a product of a social agreement. In the world disagreeing about many things, it is not unusual to have a variety of dates celebrating essentially the same thing – the start of the “New Year”.

For travelers, the disparities in calendars give a unique opportunity to travel through space and time, all in one.

“They were occasions when I would celebrate the New Year three times in a period of a few months. For instance, the Croatian in December in Zagreb, the Chinese New Year in February somewhere in Malaysia, and then the Khmer New Year in April in Battambang, Cambodia”, Ivan said to Katapultura.

“Asian cultures vary not only by the date of their New Year celebrations but also by their durations. What we do speedily in one night in the West and then, after a single holiday, come back to the usual working track, in Asia can be an event of two weeks!”

For Chinese girls on the Malaysian island of Penang, the 15th day of the Lunar New Year is a special event of love – Chap Goh Mei!

Presenting our editor as a “tireless traveler who vividly tells his travel adventures on Pipeaway.com”, Katarina was especially interested in Songkran in Cambodia, the unusual and special water throwing festival that marks the Khmer New Year celebrations, Chaul Chnam Thmey.

“In Cambodia, Khmer New Year lasts three days, from 13th till 15th of April. They celebrate a traditional lunar year, at the end of the harvest season, and before the rains come. They welcome the wet season exactly by celebrating water. The most extreme part of this New Year celebration includes rubbing people’s faces with baby powder and pouring abundant quantities of water. There is a wide arsenal of water weapons, from guns and rifles to balloon bombs, hosepipe, and full buckets”, Ivan explained.

Countries that celebrate Songkran, such as Thailand, Laos, Myanmar, and Cambodia, measure time according to the Buddhist calendar. In 2021, they will celebrate the year 2565!

India celebrates the Buddhist New Year too. But in a country of a variety of cultures, one can also observe Islamic and Christian New Year.

The largest portion of Christians is in the state of Kerala. This is where writer Kristina Gavran celebrated the New Year on Vasco da Gama Square in Kochi, in a carnival atmosphere, eating banana chips and bhaji, and watching DJs, singers, and dancers on stage. The highlight of the Cochin Carnival is the burning of Papanhi. The giant statue of an old man is the remnant of the Portuguese colonial past.

“There is a belief that the New Year is born as a little baby, a child. It matures to be an old man at the end of the year”, Kristina explained to Katapultura. “They also connect it to a certain topic. Sometimes it’s a flood, sometimes a tsunami, sometimes ecology. The burning of Papanhi is saying goodbye to these events.”

“People put masks of Hindu gods during a period of two weeks, which ends with a New Year procession led by a big gold-adorned elephant and a drummer”, Kristina noted. “It is interesting that traditional members of the procession are also transsexuals, typically quite stigmatized and socially excluded people of Kerala. But on the day of the carnival, they are welcome and greeted. At this time, Indian society gets better, and those from the margin of the society suddenly get into its center.”

Christian stories say that Kerala is the place where Saint Thomas the apostle disembarked and started spreading the teaching of Jesus.

In the New Year period, the Christmas spirit is celebrated through star-shaped lampions, decorated trees of coconut or mango, and proudly displayed nativity scenes.

The actress Romana Petrušić took the listeners to the state of Qatar, where two-thirds of citizens are Muslim. New Year’s Day is a working day, like any other. There are no special holiday decorations in the streets of Doha, the country’s capital. However, there’s a light show whenever you visit the city!

“The lights on palm trees, in the town, everywhere. One could think that every day is a New Year’s Day there”, Romana said. “They do not decorate the streets even for Ramadan. Qataris celebrate their religious holidays by visiting each other, family to family. Men and women meet in separate chambers of the house. Also, they count the new years differently, from when Islam was founded, from the appearance of Muhammad.”

In Algeria, 98 % of citizens are Muslim. The journalist Maja Peterlić testified that the streets of Algiers in December do not scream New Year either. The only people who followed the French/European trends of New Year celebrations were perhaps the older generations of Algerians. The parties in expensive restaurants and hotels are mainly reserved for foreigners. One such hotel is where the journalist welcomed 2020.

“It was a New Year in Berber style. Some singers, classical dinner and countdown at midnight, quite a few Berber dances”, Maja explained. “Women tie a scarf around their hips and dance a peculiar dance with nice, but not too lascivious, belly dancing. And they shout in a peculiar way, cheering up the men or simply expressing happiness and joy.”

The joy of dancing is in the center of every party in Cuba too, if we believe the professional salsa dancer Ramon Yudimir Noa Caraballo. For Katapultura, he talked about his New Year celebrations in Havana, surrounded by the nearest family and the best food they had.

Wherever in the world we are, and whenever we choose the starting point of our counting, there is this one common thing that connects us all: the hope that tomorrow will be better

“We prepare a soup, some kind of potato, frijoles negros (black beans), rice, meat (it could be pork, chicken, or both), and bananas”, Ramon revealed. “Those could be breaded bananas or fried like tostones (thicker slices) and chicharitas (salty chips). We drink beer and rum, and for New Year -sidra or champagne.”

Wherever in the world we are, and whenever we choose the starting point of our counting, there is this one common thing that connects us all: the hope that tomorrow will be better. We are all hoping to turn the new chapter of our lives, forget the gloomy past, and start anew. In that name, we raise our champagne glass too!

The radio show Katapultura is broadcasted since 2004. In 2007, it won the prize of the Croatian Journalist Association for the best-edited radio show.

The entire show on New Year celebrations around the world can be found on the Katapultura webpage. The language of the show is Croatian.

Did you like this article on New Year celebrations around the world?
Pin it for later! 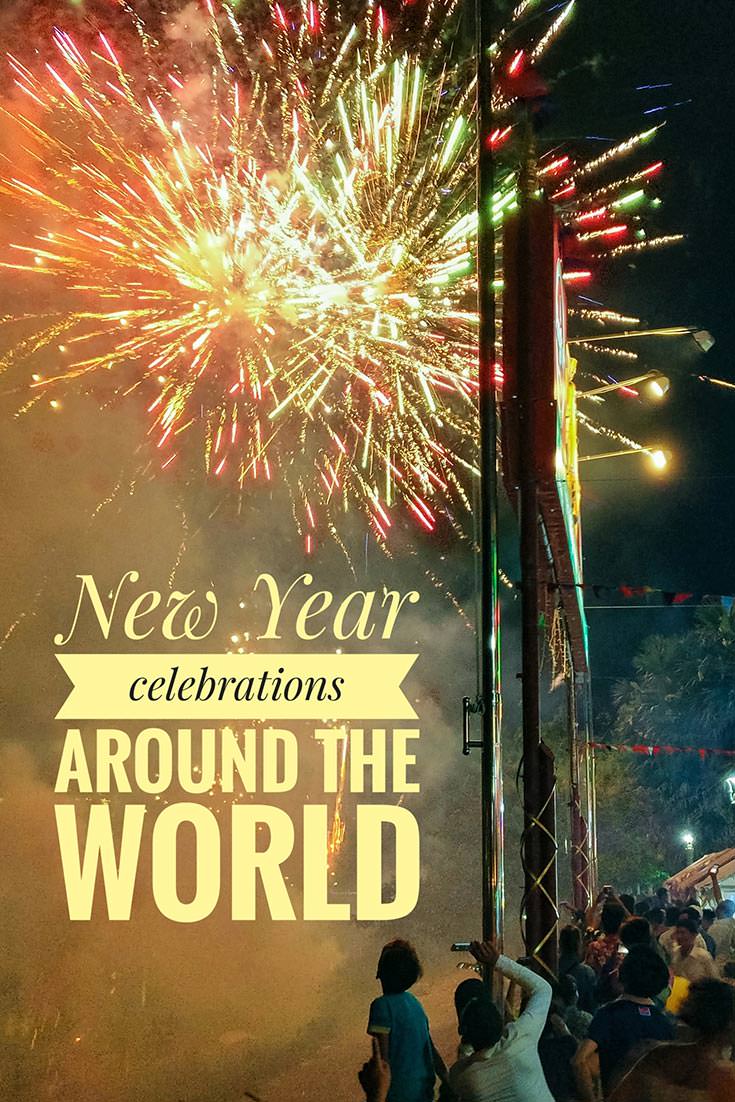