The airport security check is probably the most stressful area of an airport. Well, unless you have a fear of flying! In that case, biting your nails before boarding that “terrifying” flight can probably annulate all the stress associated with the mandatory screening of your body and belongings. Terrorism attacks and attack threats at the beginning of the 21st century have tightened many airport security procedures. One of them is shoes off policy. I understand that airport security requests to remove your shoes with a goal of protecting you as a passenger. But this stressful event of stripping at officer’s request could be done with respecting the passenger’s dignity and general health standards.

As my last week’s trip from Europe to Asia reminded me, airport rules on shoes vary. The overall approach to passengers who need to go through this procedure is also very different. Zagreb and Singapore are miles apart, not just geographically.

In March 2017, Croats opened the new passenger terminal at Zagreb Airport. The airport is now bearing the name of Franjo Tuđman Airport, the first Croatian president. He was a controversial historical figure who led the movement for the independence of Croatia in the 1990s. On the other side, he also left the heritage that still stirs up the discussions about the destroyed economy, human rights and media freedoms, corruption and war crimes. Remembered as a grumpy man with tightened lips, who was maundering a lot about internal and external enemies, even on exactly this airport, Tuđman was a very particular political figure. Croatian politics is still trying to infuse his personality cult by erecting low-quality monuments. At the same time, younger generations are purchasing one-way tickets more than ever. Franjo Tuđman Airport’s departure gates are very busy.

“Take off your shoes”, says the security officer resolutely, while I imagine how a smile would fit her face nicely.

In the last two years of using the new terminal of Zagreb Airport, I’ve never heard ‘hello’, ‘thank you’ or ‘please’ at this airport security check. You know, all those words they teach you in the kindergarten. One can hear only orders as if we are recruits in the military camp and not passengers at the airport.

“Should I put my shoes in this same bin?”, I ask in disbelief. For two years, I was never offered a dedicated bin for shoes at Zagreb Airport, never. And I did complain every time. Officers would usually refer me to their superiors. Nobody liked the idea of reporting the customer’s feedback. Praise the irresponsibility! I did file the complaint more than once. And nothing ever happened.

And then she surprises me! She brings over a special plastic security bin with a printed image of the shoes on it. Her eyes are rolling and her grumpiness that fits well with the airport name increases. She handles it to me with no words. Oh, so now there ARE special bins for shoes? No answer. She refuses to talk to customers who expect her doing her job.

She doesn’t offer me those blue disposable slip-on feet covers. I don’t feel welcomed enough to ask anymore. I walk barefoot through the metal detector.

In winter 2016, the researchers from Finland’s National Institute for Health and Welfare and the University of Nottingham swabbed a variety of frequently touched surfaces at Helsinki-Vantaa Airport. The study published in BMC Infectious Diseases suggested that airport security bins might be the germiest thing one can come in contact with at an airport! Plastic is a non-porous material, so viruses can survive longer on such surface. Airport screening bins turned out to be the hotspot for respiratory infections such as rhinovirus (common cold) and influenza A!

While none of the toilet surfaces were affected, half of the examined bins were carrying these dangerous viruses! When we talk about these exact viruses, it is more dangerous to touch the airport security bin than the toilet lid! So all those times when you were thinking about how to exit the restroom without touching the door handle, your hygiene worries possibly missed the target!

The study concluded that the airports could serve as potential risk zones for pandemic threats. After the SARS outbreak in 2002 and the Ebola epidemic in 2014, we should not ignore this warning.

Would you rub your shoe over your face?

I didn’t know about this study when, in late 2017, Zagreb Airport security check officials asked me to remove my shoes. When I requested the special box, they didn’t have any and suggested I dump them in the standard plastic bin. Yes, the same container where you put your mobile phone, your food, your water bottle!

It was winter time, and my shoes were dirty. They were so dirty that, in pure shock, I asked the passenger next to me: “Why waste time? Do you want me to rub my shoes directly on your coat?”

Every time they ask you to put your shoes in the same bin as everything else, they are asking you to lay face down on the floor! Roll your apple on the ground! Eat your snacks without washing hands! Rub your mobile phone against someone’s soles! Share your water bottle with a total stranger! If you are obediently putting your shoes in the regular bin, would you comply with all of this too?

When I complained to the officers, they said it is not their responsibility. They manually operate these bins on a daily basis! I couldn’t understand that they had no interest in having higher hygiene standards of their working environment. Why was it me who had to be concerned about it and write to their superiors?

Zagreb Airport’s Customers experience management team promised to process my feedback quickly, in 15 days the latest. And then, three weeks later (of course!), I did receive an answer:

I would’ve been extremely proud of myself if my complaint motivated Zagreb Airport to improve their services in December 2017. Sadly, my experiences with their security check in the past year, as well as this last experience in January 2019, showed that they do not always provide the dedicated shoe bin. Even when they do, a customer has to request it, with an inappropriate response by the personnel.

Singapore Airport is the best for a reason

My transfer at Changi Airport in Singapore, rated as the World’s Best Airport by Skytrax for the sixth year in a row, shows how airport security check can be done differently!

First of all, airport security staff are not just doing a technical job! They are communicating with people, and should be reassuring them about the safety of the experience they are about to embark! Welcoming with a smile and clear instructions presented in a friendly way, and referring to customers with “sir” or “madam”, is already an improvement. At Zagreb Airport, sentences were simple orders (“Belt!”, “Laptop!”, “Liquids!”).

Do you want to stay safe when flying? Read here which seat in the plane you should select!

When I leave my stuff for screening at Singapore Airport, they give me a plastic plate with a number corresponding to all the bins with my belongings. Just like in a clothes store, I can get the bins with my stuff back only when I present the plastic plate. This system against any accidental confusion with the containers or even stealing leaves your mind in peace. Even if they detain you by additional pat-down screening, you do not need to worry! No more panicking that someone took your iPhone!

After my shoes go through the screening (in the special box, of course), I put them back on. It takes some time, and the security officer shows extremely kind attention by asking if I need help with anything. His smile reassures that he is not rushing me, but only supporting me in the security check process.

I know that the quality of dealing with customers at world airports varies. From Singapore’s assisting friendliness to Bucharest’s “go find your own plastic bin” policy, the service at the airport screening shows the dedication of the airport towards its customers. The truth is that customers can feel thankful and protected even when the searches are rigorous if they are employing reason and user-friendly communication about the procedure.

When I traveled through Berlin Airport, the airport security officer asked me to take the paper tissue out of my pocket for screening. “Put it in the box”, the officer requested. “I don’t want to put it in the box”, I answered. The fact that he requested to distribute my germs with other users of the same bin, as well as the fact that he thought I would use that very paper tissue after it touched all other people’s belongings, shocked me.

I don’t know if my experiences sound to you as hypochondriacal. But studies have been clear that public health is in jeopardy when we talk about airport security check.

Is dirty floor not a security hazard?

Did you ever see the cleaners at the airport security check area? Yes, that area where some passengers need to take their shoes off and then walk barefoot where others walk in shoes! Do you think they clean this zone once a day? More often? You can see the cleaners going through the terminal swiping the floors. But security measures and often crowding at the screening area do not allow them being as thorough as they should be at one of the most hazardous places at the airport. If they even get there during the operational hours!

If viruses could spread through the airport security check, couldn’t we call that a potential terrorist threat?

The fact is that various people are using airports. We cannot possibly know where their shoes have been. For instance, experts warned that if someone has been on a farm and then walked through the airport, the fecal matter would contaminate the floor.

Passengers who didn’t wear socks or those who had to take them off already complained about getting fungus at the airport.

People with diabetes are in special danger! As they lose protective feeling in legs, they should be very careful not to step on something when walking barefoot.

And then, if we put shoes in the same bins as everything else, about what kind of security are we talking?

It is actually quite paradoxical that the airport area reserved for security might be the one that has the weak spot. If diseases could indeed easily spread through airport security bins, wouldn’t the security personnel’s job be to prevent the possible terrorist attacks at this vulnerable part of our protective system?

Airport security and shoes – the solution

The solution is simple. Security screening trays should be frequently disinfected. Passengers touching them should use hand sanitizer or wash hands after use. Until screening of the shoes gets improved so that we don’t have to take them off when traveling, security officers should be treating those shoes not just as a potential threat for a metal detector, but also as a threat for public health.

As for Zagreb Airport (or any other, if it matters), it shouldn’t invest energy in communicating empty phrases with passengers to control possible negative PR but indeed train and educate their staff. Printing an A4 paper and gluing it to some dedicated bins is a minimal cost compared to potential health threats they are exposing their passengers to.

Do you have any particular experiences at the airport security check? Please share them in the comments!

If you liked this article, pin it for later! 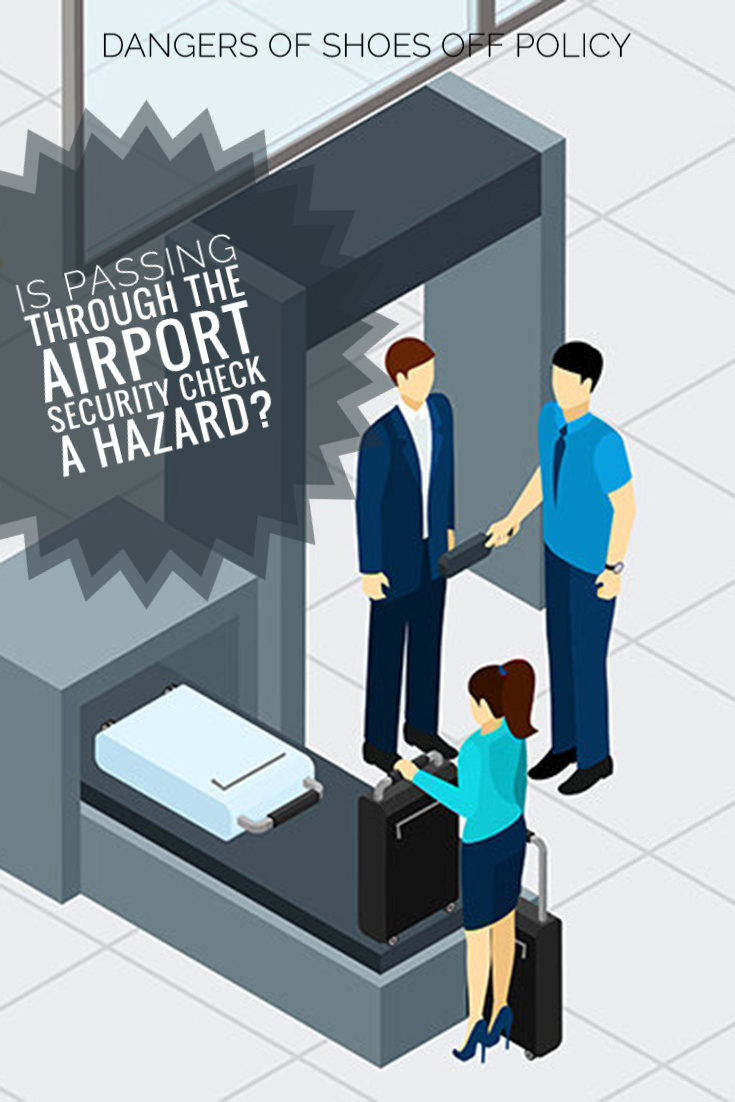 Visit Aurland, Norway: Stay at Aurlandsfjord like a lord!