We should all know more about the Kingdom of Aksum. Yet, the Aksumite Empire, with its own gods, myths, and history, seems to have vanished from our collective knowledge, not as the first civilization to experience so.

I don’t know who Luca Tosi is either. The Internet doesn’t have a clue about him either. My knowledgeable Ethiopian tour guide has never heard of the guy. Yet, the memorial stone in honor of Luca Tosi (1985-2013), “a talented young man who, engaged with the ideals of peace and friendship among all nations, took part to the struggle for the return of the obelisk snatched to Rome”, stands there on the hill of Yeha Hotel in Aksum.

The hotel seems to be worn out, with no guest in sight. Aksum tourism is not in its heyday. Just me and a Dutch guy who also read in some guidebook that this is a great viewpoint of the stelae field nearby.

At one of the oldest continuously inhabited places in Africa, the people of the Aksumite civilization erected the world’s greatest monolithic monuments, buried some of the most important royalties of the time, and became the guardians of a very controversial artifact – Moses’ 10 Commandments that they supposedly still keep in the mythical Ark of the Covenant in the local chapel.

With not one but many fantastic story plots, why don’t we know more about the Kingdom of Aksum?­ Is Luca Tosi just the freshest example of the theory that not everything written in stone is “written in stone”?

Where is Aksum located?

Aksum (sometimes misspelled Axum) is situated in the highlands of northern Ethiopia, in today’s Tigray Region.

At an elevation of 2.131 meters, the Kingdom of Aksum was nested as one of the most powerful states between the Eastern Roman Empire and Persia.

In the 3rd century, the prophet Mani regarded Aksum as one of the four great powers of the time, next to Persia, Rome, and China.

Aksum Kingdom’s rise to power grew from the 4th century BC, achieved prominence by the 1st century AD, and declined by the 10th century, after the rise of Islam and Arab dominance in the Red Sea.

Mesele, my local guide from Debra Damo Tours, shows me the vastness of a once-bustling metropolis. Royal tombs and gigantic obelisks on the left and so-called Queen of Sheba’s Bath on the right (technically, not her bath, but still equally impressive water reservoir hewn out of solid rock).

These are just a part of the visible Kingdom of Aksum. What we can see from the Yeha Hotel terrace is only a tiny fraction of the mighty Ethiopian empire’s remains. Most of its secrets still lie below the ground, waiting to be dug out.

Our bajaj, adorned by the “I love Ethiopia” sticker on one side and Christ’s portrait on the other, drives up the hill of Abba Liqanos, successfully navigating through the labyrinth of rocks scattered on the road. Our destination is the tombs of King Kaleb and his son Gebre Meskel.

We stop at the point where once there was a big parking lot. But then the hole opened in the ground. A car dropped into it, and they closed the area for further archeological research. The underground is slowly revealing Aksumite Kingdom’s secrets.

The twin tombs of the two Aksumite kings from the 6th century are an example of the punctilious work of the builders of the time. Even if in different dimensions and shapes, the stones of the tombs were laid with high precision, creating a clean entrance into the underground chambers.

But then the unusual detail that differentiates these Aksum tombs from the Egyptian ones – the crosses engraved on the walls. These Ethiopian kings were Christian!

Mesele drives me to Abba Pentalewon monastery, where he studied to become a monk once himself. It turns out he is not just a tour guide and a bajaj driver, but he also has a very direct insight into this church built by one of the famous Nine Saints in the sixth century.

This is where King Kaleb retired after his abdication, and the treasures including the king’s crowns are still kept there.

Muze (12) and Gidey (14) are Mesele’s successors in studying religion in this monastery. They happily stop their daily readings of the holy books, take off their shoes and rush up the hill. They stop to kiss the church walls, before showing me the colorful paintings inside.

The early Kingdom of Aksum worshipped a serpent

The Old Testament of the Bible seems to be an important Ethiopian source of historical inspiration. But the Holy Book doesn’t even mention some of these people. The legendary founder of Aksum was Aksumawi, the son of Aethiopis (that’s supposedly how Ethiopia got its name). Aethiopis is claimed to be the great-grandson of Noah, the builder of the Ark in the famous Great Flood episode.

Before honoring the God of Israel, Aksumites worshipped the Snake, sacrificing their virgin daughters to the serpent

The story says that one day a giant snake called Wainaba attacked Aksumawi’s kingdom and killed the ruler. For four centuries, the people of the kingdom engaged in the serpent cult. They’ve been sacrificing their virgin daughters, goats, and milk to the snake!

The hero from the other side of the Red Sea, Angabo, offered to kill the serpent in exchange for the throne. He succeeded, became the new king (who ruled for two centuries, as people magically lived longer in those times), married, and got a daughter named Makeda – the legendary Queen of Sheba.

According to The Kebra Nagast, the Ethiopian holy book, the Queen of Sheba had an affair with King Solomon in Jerusalem. She converted from worshipping the Sun to worshipping the God of Israel. Nine months later, she gave birth to Solomon’s son – Menelik I.

He will be the one who will steal the two stone tablets with God’s Ten Commandments from the Temple of Solomon, and bring Moses’ Ark of the Covenant from Israel to Aksum.

The most controversial biblical relic is supposedly kept in the chapel next to the Church of St. Mary of Zion, but only one man, the virgin guardian of the Ark, is allowed to approach it. Upon his death, a new virgin monk will be appointed the guardian role.

Mesele guides me to another important Aksum tomb, the one belonging to King Bazen. This emperor was supposedly one of the Three Wise Men who followed the star to Bethlehem, to greet the birth of Jesus.

Cut in rock, the tomb has multiple burial chambers. On the top of the grave stands a megalith, considered to be one of the earliest structures here.

Apostle Philip baptized the Ethiopian eunuch in the first century, so he became the first Christian through baptism. But it was during King Ezana (around 325 AD) when the Aksumite Kingdom adopted Christianity as its state religion, the first one to do it after Armenia.

The Kingdom of Aksum was also the first state to use the cross on its coins. The Ezana Stone, found by the local farmers, tells the story of the king’s Christian conversion and his victories. The inscription on this tablet is in three languages: Greek, Sabaean, and Aksum’s own – Ge’ez.

In pre-Christian times, the gravestones of Aksum came as monolithic obelisks or stelae. As the name says, they carved each of these monumental granite objects out of a single piece of rock.

Resembling thin skyscrapers (with carved fake doors and windows), these masterpieces of human engineering were marking the tombs of emperors and nobles (for their ascent to the stars?).

The largest of the impressive towers at Northern Stelae Field would measure 33 meters in height, but its 520 tons fell and broke during the installation. Still, this is probably the most massive monolithic stela that ancient humans attempted to erect.

Also, it fell right onto Nefas Mewecha, the largest megalithic tomb on Earth! The capstone of this tomb is 360 tons heavy and is the second-largest stone Aksumites or any early civilization ever used.

The Obelisk of Aksum measuring 24.6 meters in height was stolen by the Italian army during the short occupation period in 1937. On Mussolini’s personal orders, they shipped it to Rome. After a long diplomatic dispute between the two countries, the obelisk finally came home in 2005. It was reinstalled in Aksum in 2008.

The oldest obelisks (dating up to 5.000 years BC) one can find at Gudit Stelae Field, just across from the Queen of Sheba’s Palace. One of these roughly carved stones is believed to mark the queen’s grave.

Lioness in a rock

On the road towards the Shire, we stop at the quarry. Gobo Dura (Gobedra) is supposedly where they cut these monoliths, and mysteriously transported them five kilometers to the east.

The proofs are still there. Some partially carved future obelisks still wait to be carried, as if miners have left the site this morning.

At one of the larger rocks, we discover the Lioness of Gobedra, the stone carving with another mythical aura. Some believe that a lion attacked Archangel Michael who repelled it with such force that it left an outline in the rock. The 3-meter carving supposedly dates before Christ, but on a later date, some Christians added the cross next to the lioness.

Kingdom of Aksum and belief

Royal and religious histories intertwine in the Kingdom of Aksum like rarely anywhere else. Always on the edge of legend, the (hi)stories of ancient Ethiopia acquire belief.

Just across the stelae field, the church compound is home to fifteen ancient stone thrones where coronations of the Ethiopian kings were executed.

The pronouncement of the king or the priest from the church stairs had the force of the law. There is no room for doubt in this Christian empire that wants to lean on King Solomon’s dynasty.

Sun was setting down on the terrace of the outworn Yeha Hotel. Next to the benches, there was this 21st-century inscription with the words of Luca Tosi. Was it just another Aksum stone memory that hoped to find its place among the legends?

Before leaving this world, Luca wrote: “Be of good heart, pilgrim! Your voyage cannot end here! Many people await you along your path, and destiny has reserved many more surprises for you!”

I still don’t know who Luca was. But at that moment, while the emperors’ obelisks and fascinating churches were sinking in the twilight, Luca’s words sounded both royal and prophetic.

Did you like this article on the Kingdom of Aksum?
Pin it for later! 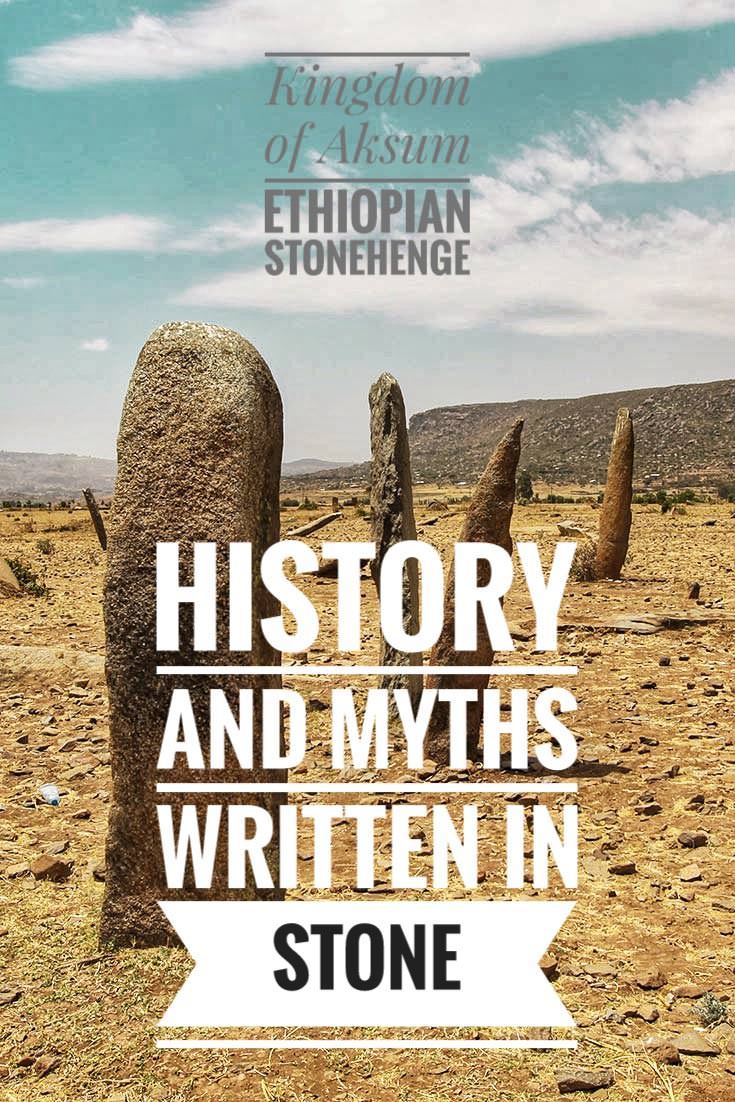 Circus of Postcards : Building the Future for African Street Children