Squeezed together in front of the passport check-points at Split airport, it seemed everyone was eager to enter Croatia. A month ago, we were promised a country that handled the COVID-19 epidemic successfully, with low number of infection and death cases. The end of the lockdown made us all buy tickets and rush over to this Mediterranean as it once was. “Croatia full of life”.

Children swiping the airport floor with their stuffed toys. Their parents discretely pushing forward, so nobody would jump into the precious queue. No officer in sight who would alarm us that we were not keeping the prescribed distance. We all seemed like one happy group, a family almost. Thrilled we will enter the promised land of corona-free tourism. Only Moses could separate us!

It was obvious that countries such as Croatia or Greece, which heavily depend on tourism, had to open up to visitors sooner or later. But under what conditions, under which measures? If the two-meter distance rule becomes just a mellow euphemism for digging a hole under one’s feet (and we all know what lies two meters under the ground), what kind of touristic promotion would that be? Tourism which gambles with the lives of its visitors and locals can only prosper as a funeral business. Six feet under.

Coronavirus in Croatia is a racist!

“Do you continue for Zagreb?”, that was the only question the passport control officer asked. Sure, I left my contact details back on the plane. But here, entering the promised land free of disease, they gave no further instructions. Flying in from Greece, I was allowed to enter the city of Split, even if it was known as the center of a major COVID-19 outbreak that decimated one retirement home.

As an EU-citizen, I didn’t have to enter quarantine. I did have to follow special recommendations for the first 14 days on Croatian soil. However, nobody apart from Google informed me about this.

I didn’t get any informative leaflets. Nobody checked my temperature. Nobody asked me for test results. I didn’t even have to remove a mask from my face for the purpose of identification!

The tiny dangerous virus proved to be racist! According to the Croatian border policy, the virus checks the nationality of its victim before attacking it!

When I flew into Greece from Serbia, a month earlier, my experience as a traveler was much more reassuring. Greece was conducting COVID-19 tests on all passengers from Serbia (regardless of their nationality). Greece was protecting its citizens and tourists by testing everyone coming in from a high-risk country. Unlike Croatia where people who need to take a test are charged 200 Euros, the state of Greece was covering these costs.

On the other side, Croatia was allowing in visitors from Bosnia and Herzegovina (a non-EU state) without quarantine, as long as they had Croatian citizenship. This came in handy for the political elections in the country, but also promoted an unusual theory that the tiny dangerous virus is a racist! It checks the nationality of its victim before attacking!

EU-members were allowed to enter Croatia as before the pandemic. Non-EU members had to have a personal, business, touristic, or educational reason for coming. Could you have any other?

The temptation of touristic income

Wiggling with safety measures had to show the first results. COVID-19 cases in Croatia were again on the rise. But it seemed summer made Croats snooze this alarm. Tourists started pouring in and, after a lockdown, Croatia welcomed them as saviors of the stumbled economy.

The shuttle bus from Split airport to the city center was packed this week. Passengers were sitting not only in their seats but also on the aisle floor. It didn’t seem that any measure of social distancing was in place. Sitting on the floor was not a hygienical solution even in the pre-COVID era! The transport in the time of the infectious disease looked more like an emergency evacuation from a war zone. Priorities were not set right.

There was an another Pleso Prijevoz bus parked in front of the airport terminal. It could have certainly taken the excess of passengers. But it seemed the pandemic opened the opportunity for extra profit here, not extra care. Take the money and run! was almost official. Out of change, the driver of the full bus ran towards the bank to get smaller denominations, just so he could sell even more tickets and pack even more passengers into the aisle of the bus!

In Greece, which clearly marked if certain seats in public transport (be it ferry, metro, or bus) should not be sat on, in order to maintain a safe distance, I experienced that fear of infection is much more real than a hunger for extra profit.

Do you wonder how will the hospitality industry be after the pandemic ends? Imagine these hotels after COVID-19!

‘I prefer to sit alone!’

I was traveling with a friend in Crete. We bought two tickets for a bus heading from Chania to Rethymno. Even if our tickets had reserved seating, the seats were occupied. A lady on number 9, and her purse on number 10.

“I’m sorry, I believe you are sitting on our seats, madam”, I politely approached her.

“Couldn’t you sit somewhere else?”, she nonchalantly responded, showing towards the end of the bus.

I looked around, and the vehicle was full of single travelers, occupying every row.

“I’m really sorry, but the bus is full of single travelers. We would like to sit in our seats!”

She was not showing signs of changing her mind. She liked this row.

“What is your problem, madam?”, I still tried to be nice but had to repeat this question several times, drawing the attention of other passengers. Our voices were slightly rising, and I was now thinking that someone could be making a viral Youtube video out of this.

“I prefer to sit alone!”, the lady exclaimed.

“Well, buy a car!”, I lost my temper. “These are our seats, we cannot give them up for you and your purse!”

Our back and forth lasted for a minute or so, and the bus was already on the go. In the end, I called her out for being ignorant letting a disabled person stand in the aisle during the ride. My friend has Parkinson’s disease, and I didn’t really want to pull out that argument just to exercise the right of sitting in the seats we paid for. Only when he yelled out something in Greek, which sounded like thunder, but was probably “just move away”, did she finally lower her queen-Elizabeth guard and shifted to another empty seat.

The difference between Cretan and cretin bus

When this Crete bus episode happened, I thought it was primarily telling about how selfish we could become in times of crisis. I was thinking it was mainly a story of caring for one’s own behind, disrespecting people who surround us.

I had to leave Crete and discover Croatia, in order to find out that disrespect for others could have even more fertile ground. This fertile ground flourishes in the circumstances when care is absolutely absent. When nobody cares about extending one’s own personal safe space but accepts that loading up the bus to the fullest is just a new norm, something we shouldn’t object against, we welcome this universe of the ultimate disrespect. We do not care about our own life or about the life of our fellow passengers, ultimately serving just the profit of a bus company carrying us around like potatoes.

Making a quick profit should not be a new normal. Not testing enough citizens and tourists will not make the number of infections lower.

Loosening up the Croatian measures of taming the disease might have been a useful pre-election stunt for the old-new ruling political party. But open calls to tourists no matter where they come from and no matter what they carry inside of them is just a gamble game.

Croatian minister of tourism Gari Cappelli was inviting Swedes to come over when their COVID numbers were skyrocketing. He claimed that Swedish tourists do not present a greater risk. As long as they can provide proof that they booked a room, of course! Now again, Croatia became the first country to open up to American travelers, ignoring the crisis in the United States, as well as the EU recommendations.

The uprising against the regime of Aleksandar Vučić in Serbia shows that people in the Balkans cannot stand the lockdown measures for long. But even more, they cannot stand being played out by the politics, shifting from a need to need on a daily basis. Always led by politicians more invested in quick fixes to the problems, Balkan countries hardly ever develop and follow long-term strategies.

The Croatian economy was not glittering even before the COVID-19 crisis. The decision to fix the economic problems by exposing the country to greater risks is one of those short-term strategies that could prove detrimental.

Not obeying the six-foot distance is the quickest way to six-foot-under. And if that starts to happen more often, Croatia that is currently still “full of life”, might have to invent a new touristic slogan.

Did you like this view on safe distance in tourism politics?
Pin it for later or leave your opinion in comments now! 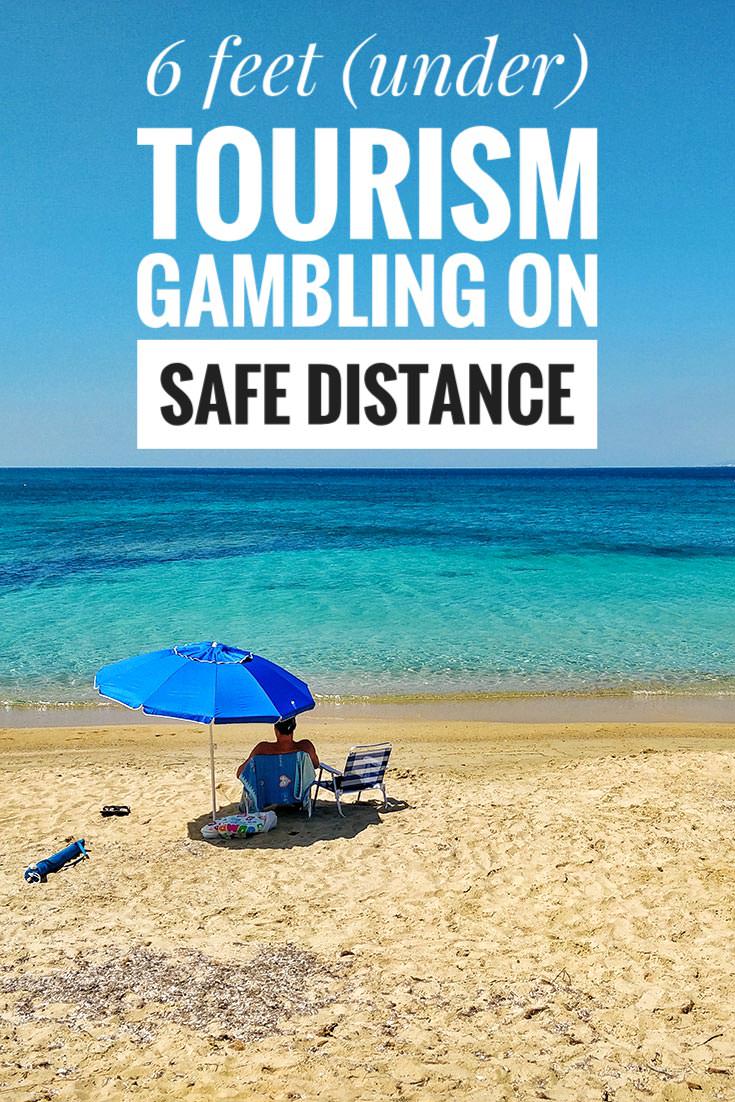 Am Phu Cave in the Marble Mountain: Stranded in the Hell Cave of Vietnam

2023 Travel Trends, as Forecasted by AI

Traveling in a Wheelchair: Making Excuses is a True Handicap

Ivan Kralj May 7, 2020
Pick a country!
Read this!
Subscribe to free newsletter!