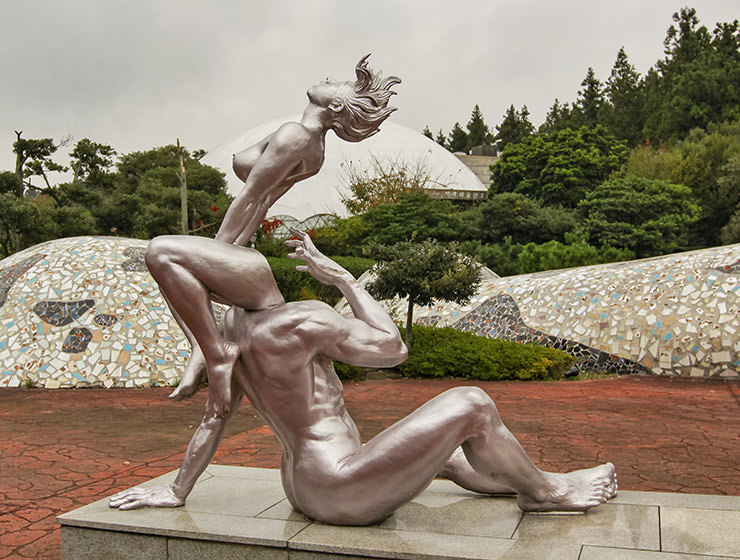 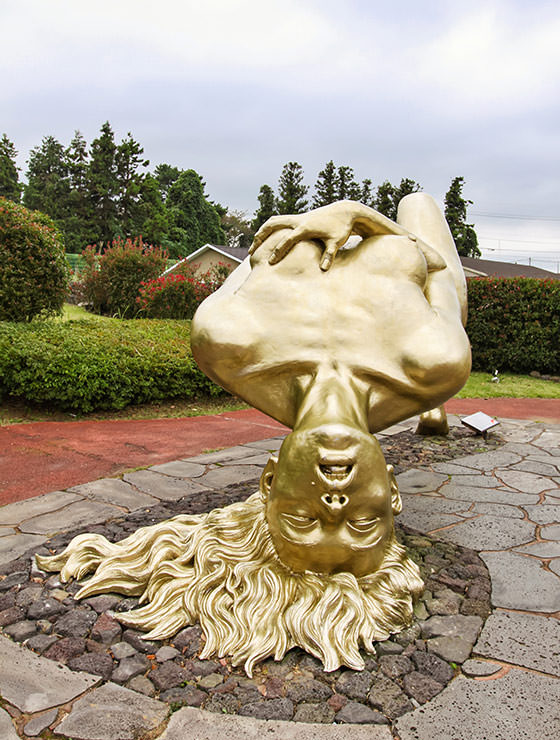 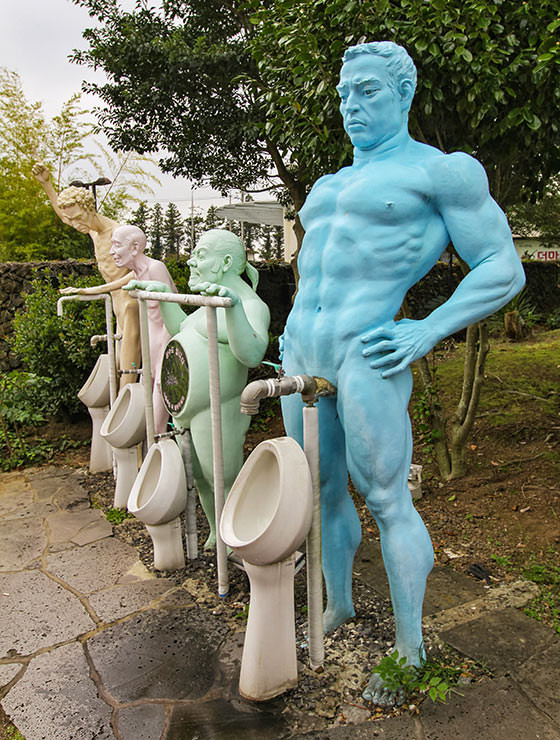 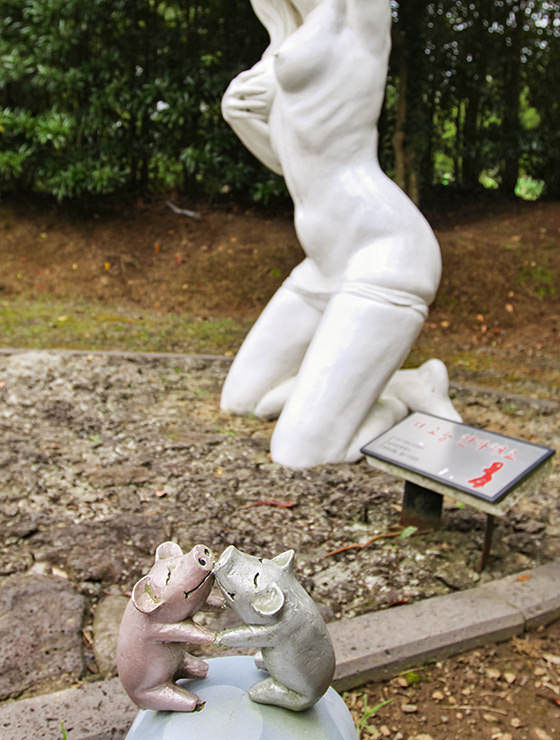 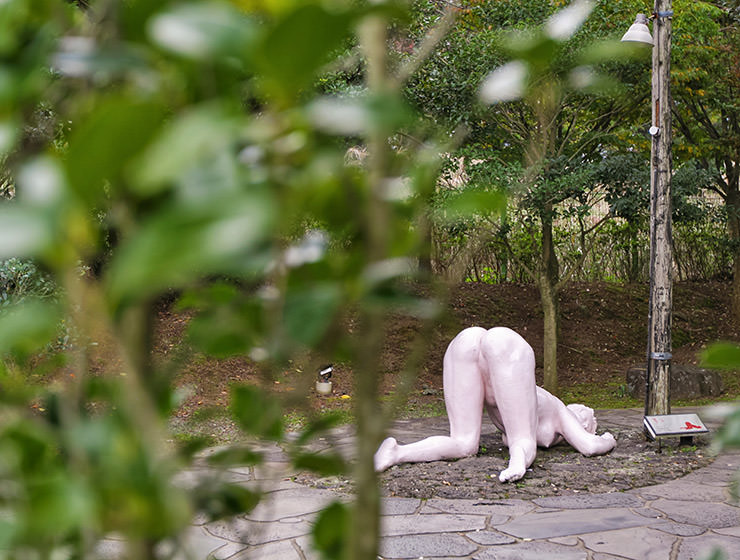 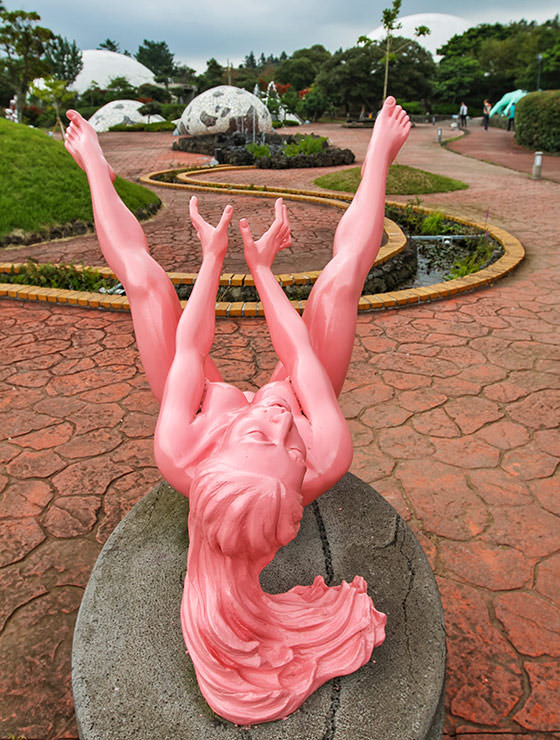 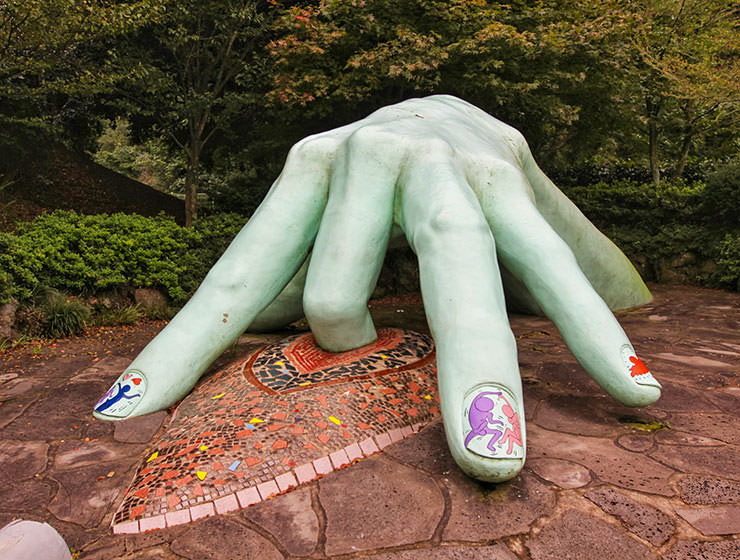 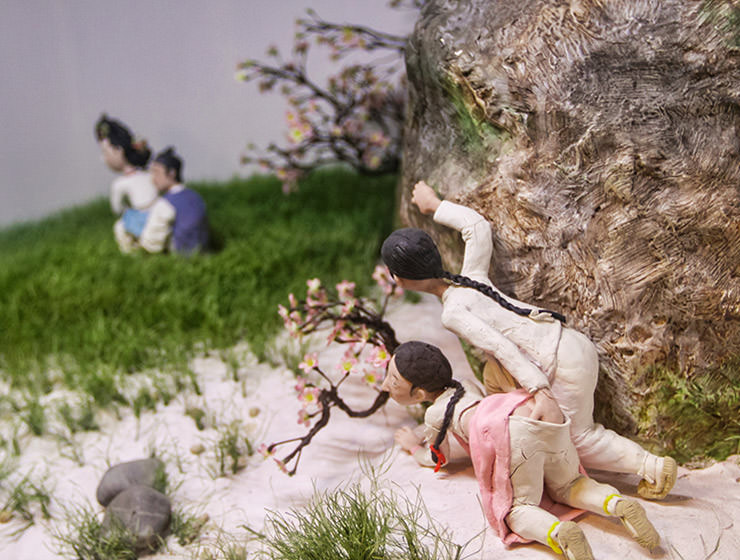 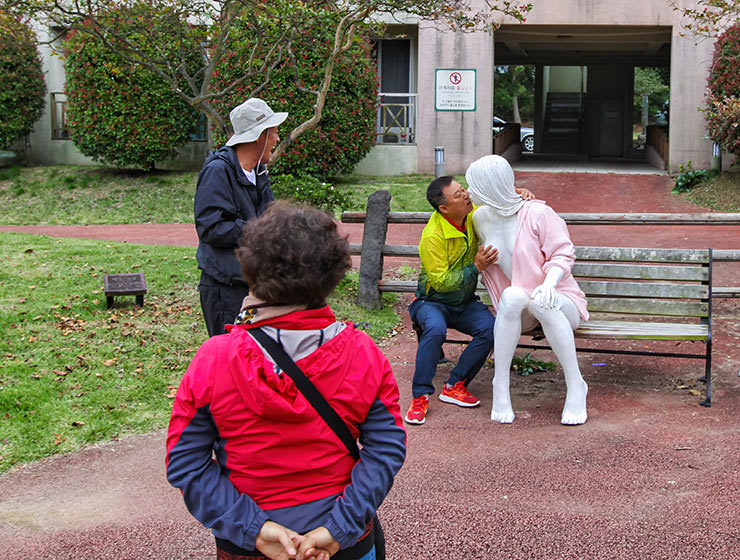 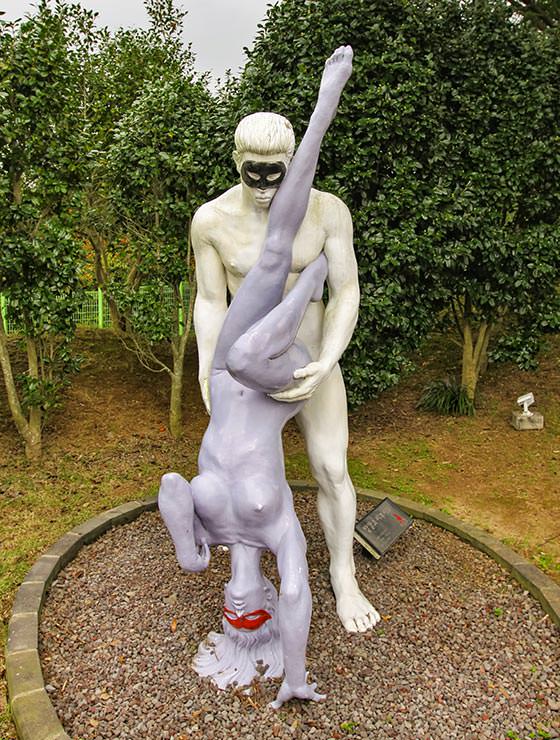 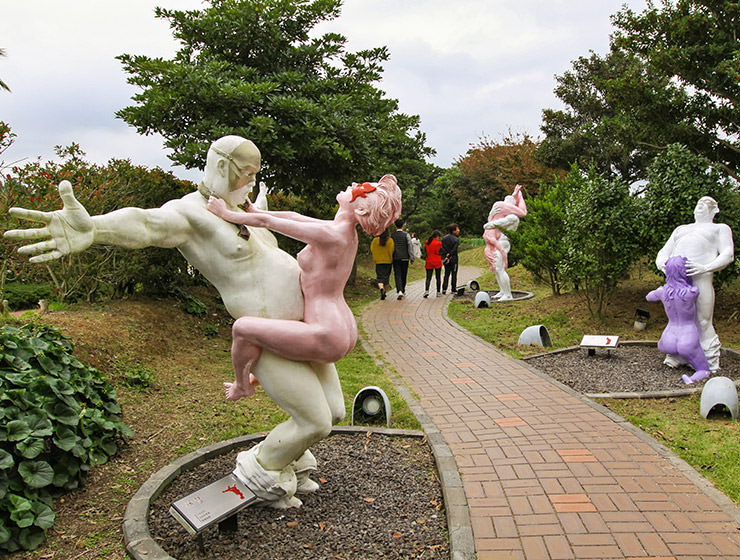 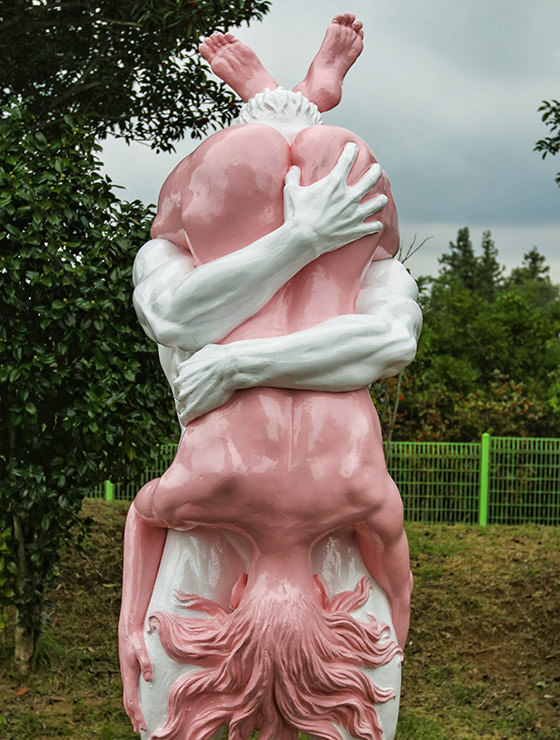 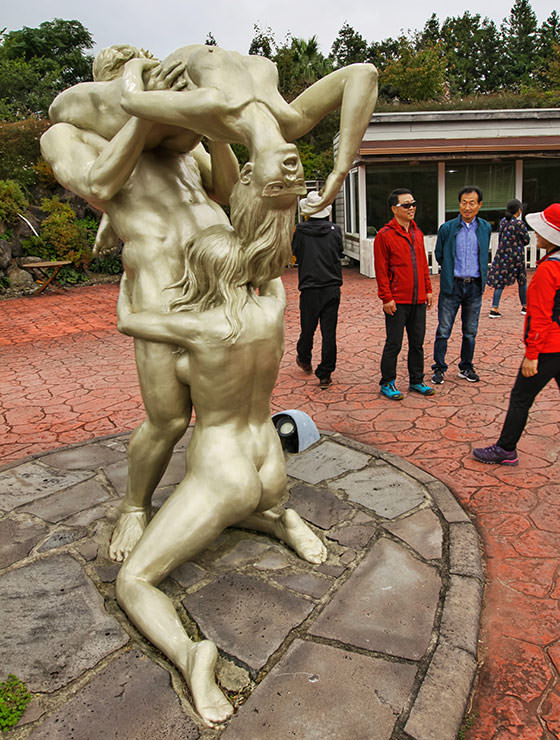 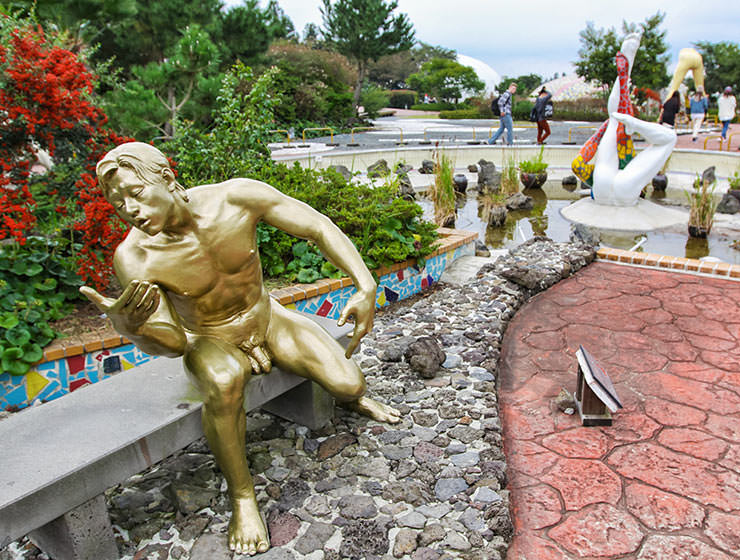 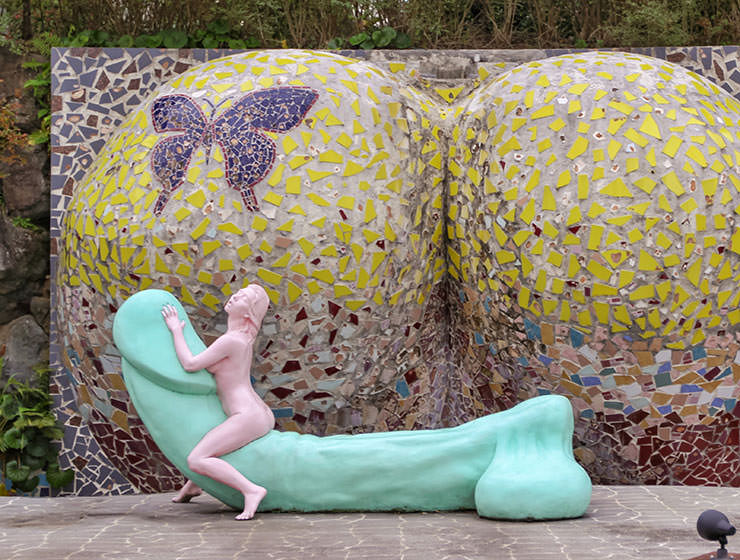 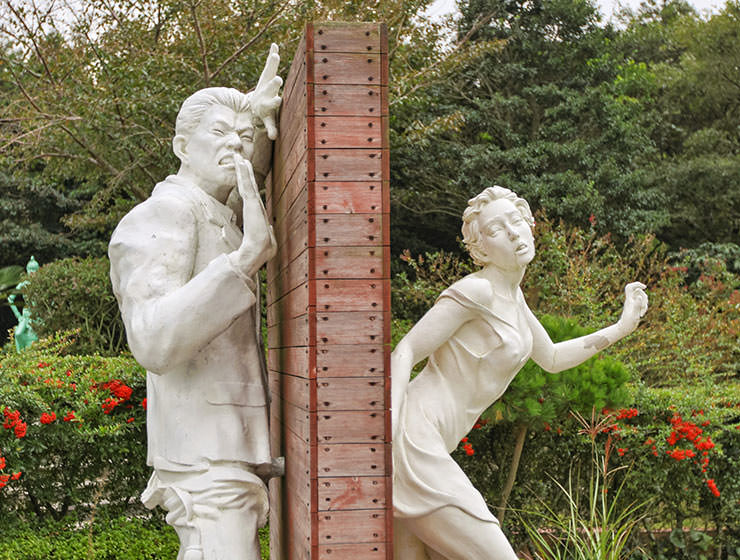 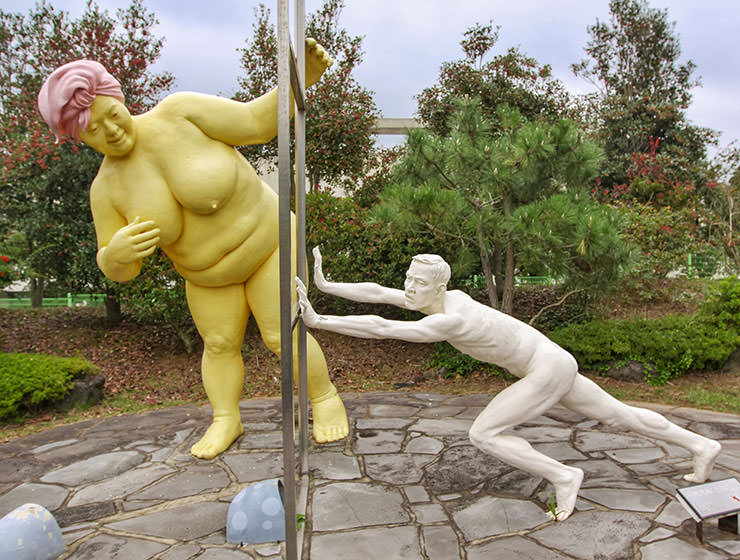 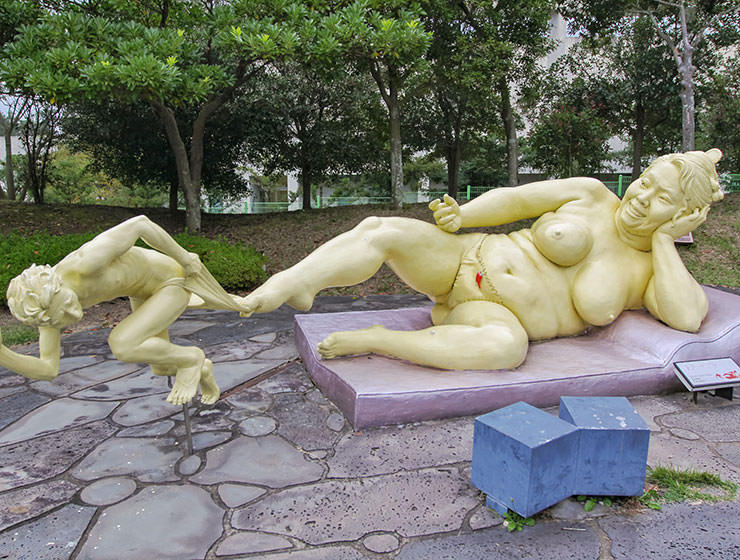 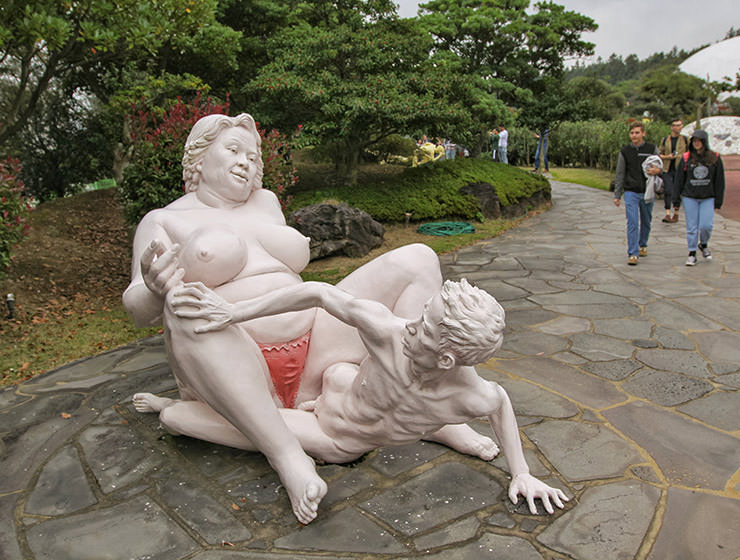 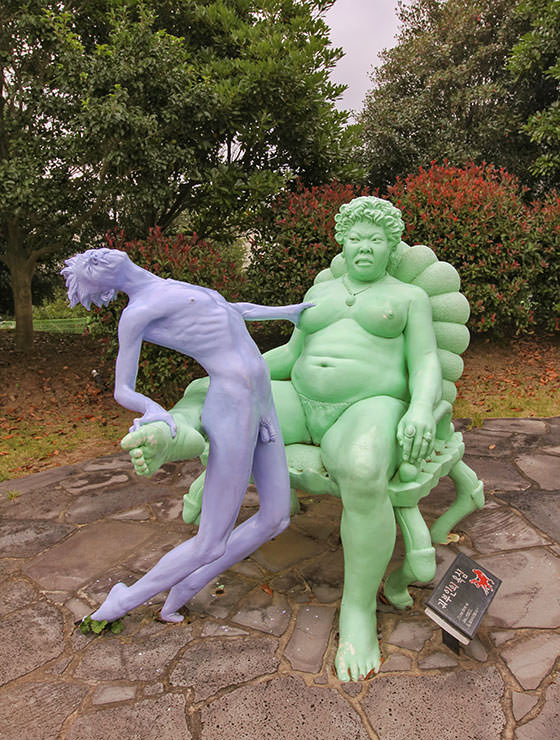 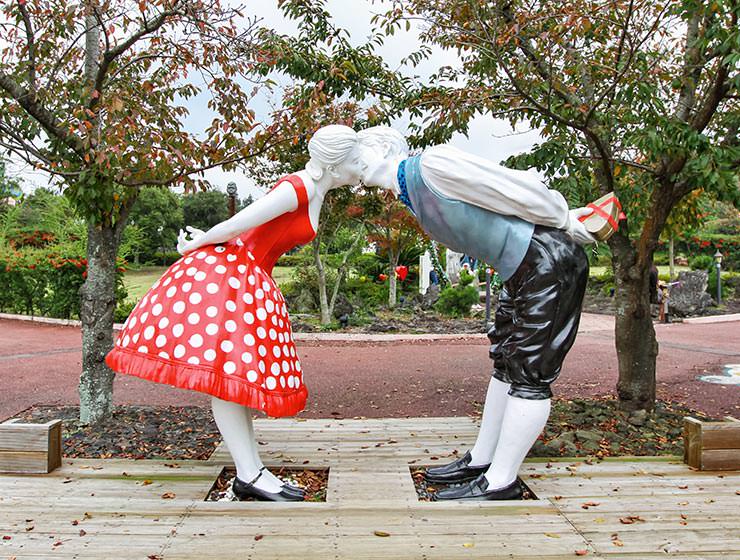 For fifteen years already, an extraordinary museum on Jeju Island plays a major role in the sex education of the people of South Korea. Its name is Jeju Loveland Sculpture Park, and it exhibits some 140 sculptures of human figures engaging in the saucy act of sex!

Sure, visitors are mainly giggling in front of the unusual display of statues having sex, but then again – in what school do you not see classmates bursting into laughter at something that the teacher said?

But beware of those pictures – they are definitely Korean NSFW! Scroll down to the Jeju Loveland photo gallery at the end of the article if South Korea’s sex park makes you impatient!

For finding love in Europe, visit these heart-shaped islands of Croatia! For even greater variety, check the world’s best heart islands!

Kama Sutra in the Korean way

An enormous woman, supposedly 9 meters tall, writhes in joy at the very entrance of Jeju Loveland. Painted in gold, she might be alone, but her craving for physical attention is real.

As if we have entered someone’s private bedroom, we witness an orgasmic spasm. The artwork’s title is “Desire”, and it is quite a tame introduction to this Korean sex park, a jungle of human sexuality that even Kama Sutra might find raunchy.

The variety of sexual positions is impressive! Dozens of human figures, even some dogs and pigs, display the old and some new ideas for your own sexual aerobic at home.

“Jeju Loveland is a place where imagination can run wild”, the motto boasts. But while the giggling crowds of young and old might suggest that this is just a humorous sex-themed park, the management promises much more! “Jeju Loveland provides a proper approach to sex culture”, they say.

Different cultures celebrate the art of love in different ways. These are the alternatives to Valentine’s Day celebrations!

The idea of subtle sex education was conceived here in the 1970s. As most Koreans were not allowed to travel abroad until the 1990s, the warm Jeju in the South became the prime honeymoon island.

In this period, families were arranging marriages, and newlyweds sometimes didn’t even know each other properly. Jeju Island was the place to meet and interact with your life partner, far away from family pressure.

The prevailing image of Asia as a conservative place is being broken in Japan too. Check how they celebrate his majesty of the penis at Kanamara Matsuri religious festival!

Love Land sculpture park opened on Jeju on November 16, 2004. It was a product of two years of hard work.

While one of the intentions was indeed the education of the public, the underage visitors to Jeju Loveland were not permitted. That’s right, sexual training in Korea starts only when you enter the 20s!

In the world of enlarged phalluses and labia carved in stone, your social inhibitions quickly break

From the giant marble penis that spurts water which bounces off the ground, to miniature dioramas that depict the sexual life of Koreans in everyday situations, sex in Jeju Loveland comes in all sizes and shapes.

Well, almost all! In a country that still sees homosexuality as a taboo, the exposition is fairly heteronormative. Except for a diorama presenting men in jjimjilbang, the traditional Korean spa, where one of them is laying down with an erection in an all-male environment, Jeju Island sex park dominantly depicts heterosexual encounters.

When in Seoul, these are the best jjimjilbangs you should visit!

While most of the sex statues are made for observation, many call for interaction. Lone male and female sculptures in Jeju Loveland just scream for your involvement, while your friends snap pictures for Instagram.

But in the end, is it just an acceptable excuse for visiting a sex shop? Is South Korea’s sex amusement park not more than a smart way of igniting the visitors’ need for kinky adult toys, readily available in the museum’s gift shop?

The description plates next to the Love Land statues do not reveal the names of the sculptors. It is almost as if authorship is not essential. Jeju Loveland sculptures drown in anonymity.

Before leaving Jeju Loveland, we are invited to throw our spare coins into a goldfish pond, where hopefully a penis-shaped fountain may fulfill our wishes.

I decide to visit the Jeju sex museum’s restroom instead. On the male toilet, the door handle in the shape of female breasts. On the door of the female bathroom, the handle is in the form of a penis in erection! One could say that it is coherent exploitation of the sex theme. But there is some awkward trashiness that blooms in this example.

While I relieve at the urinal, my pee slowly spills out of the bottom of the thing and floods the area that I thought was wet with water. That was all fountain luck I needed!

To learn more about the context of sex life in South Korea, check what this documentary on VICE has to say about Jeju Loveland!

Where is Jeju Island?

Jeju Island is the southernmost island of South Korea. It lies in the Korea Strait, the sea passage between South Korea and Japan.

Going from Seoul to Jeju Island is straightforward. A direct flight is just 70 minutes long, and there are more than 90 flights per day!

For the best available prices of flight tickets, book your Jeju trip here!

How to get to Jeju Loveland?

Jeju Loveland is located in the northern part of the island, just a 15-minute ride away from Jeju International Airport.

The taxi ride from Jeju airport to Love Land should cost you less than 10.000 KRW (8 Euros).

If you are coming from Jeju city to Love Land, you can take bus number 240 (the blue one) at Jeju Bus Terminal. You should exit at Jeju Museum of Art. The theme park Jeju Loveland is some 550 meters away from this bus stop.

If you’d like a discount on the Jeju Loveland admission fee, you should form a group of 30, and then the price would be 11.000 Won.

All in all, the discounts at the Korean sex garden do not seem to be significant, and the conditions are strict.

The opening hours for Jeju Loveland are 9 am to midnight. The last admission to the sculpture park is at 11 pm.

If you are visiting Jeju Loveland at night, you will find the park illuminated, which is a very different experience.

In any case, allow yourself one hour for the visit to the South Korean sex theme park, one of the most popular Jeju Island tourist attractions!

Where to stay in Jeju?

If you want to stay close to the park, check the best accommodation offers in the Jeju Loveland area here.

The warmest months to visit Jeju Island are July to September. In August, the daily temperature at the Korean island of desire might be from 26 to 31 degrees Celsius.

The busiest (and the most expensive) months on Jeju are January, May, and April. For lower prices, check December.

No words can replace what the images can communicate.
To learn more about Jeju’s most explicit theme park, explore these sexual sculptures in our Jeju Loveland photo gallery!

Did you like this article about Jeju Loveland, the infamous Korean sex park on Jeju Island?
Pin it for later! 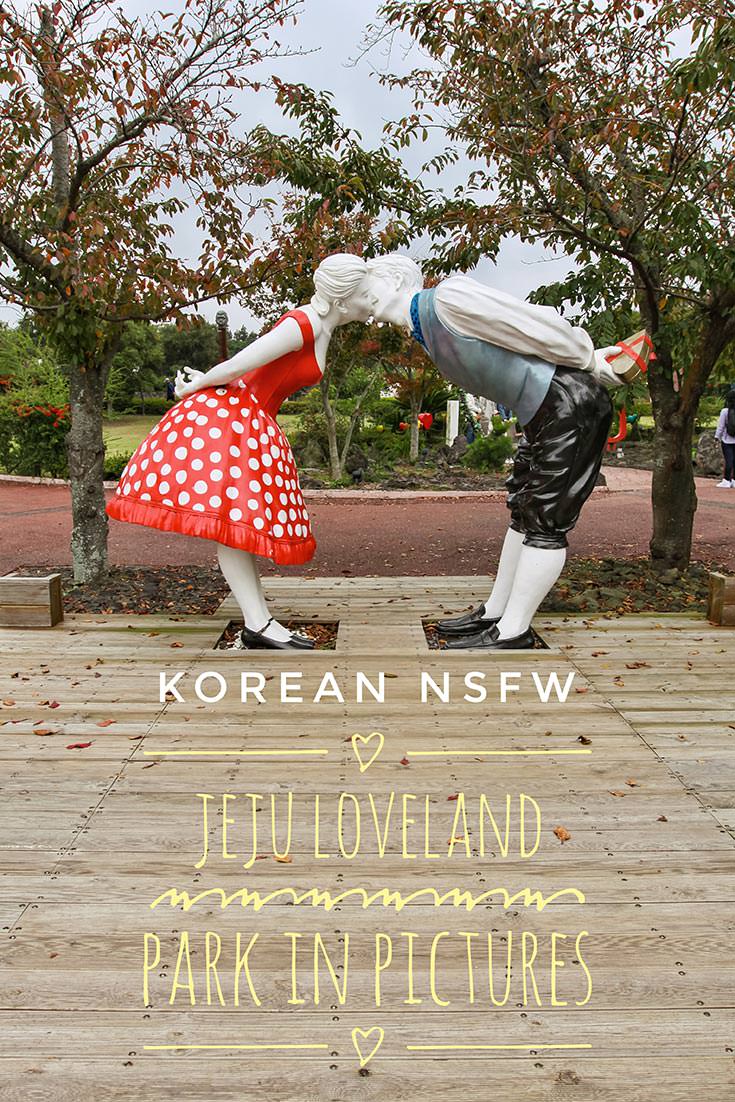 15 Things to do in Bergen, Norway: The Rainiest City in Europe

Circus of Postcards Fundraising Extended : Join Our Family of Heroes!